Tagaytay 5, Kin Call for Release of All Political Prisoners

Tagaytay 5 is a collective term referring to five farmers namely Axel Pinpin, Aristedes Sarmiento, Riel Custodio, Enrico Ybanez, and Michael Masayes. They were arrested in Tagaytay, Cavite in April 2006 and imprisoned for 879 days for rebellion charges. They have been ordered freed, August 20, 2008. 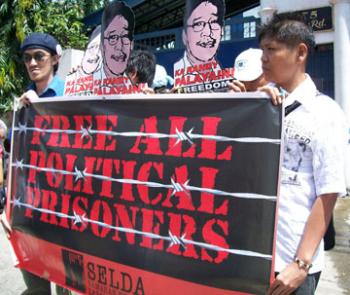 Donato Continente, spokesperson of Samahan ng Ex-Detainees Laban sa Detensyon at para sa Amnestiya (SELDA) said that out of 218 political prisoners, 191 have been arrested and detained under the Gloria Macapagal-Arroyo administration. Six of the detainees are minor, said Continente.

Speaking at the protest, Lorena Santos, daughter of Elizabeth Principe, said that her mother has been languishing in jail for eight months for trumped-up criminal charges. She said that the cases filed against her mother are without evidence.

Ranmil, son of Randall Echanis, criticized the criminalization of political offenses. He said that his father was co-accused in the rebellion charges filed against the Batasan 6. Batasan 6 is composed of progressive party-list representatives Satur Ocampo, the late Crispin Beltran, Teddy Casiño, Liza Maza, Rafael Mariano and Joel Virador. The Supreme Court junked the rebellion charges in June 2007.

Randall is the deputy secretary general for external affairs of the Kilusang Magbubukid ng Pilipinas (KMP-National Peasant Movement). He was arrested on January 28 this year. He was charged with murder in connection with an alleged mass grave found in Hilongos, Leyte. Randall is detained at the Manila City Jail.

Pinpin called for immediate release of all political prisoners. He said that no one should be detained because of one’s political beliefs.