Annual audit reports of the Commission on Audit (COA) show that the Philippine Army chiefs rom 2003 to 2007 have accumulated P1.6 billion or US$34.396 million (based on exchange rate of US$1: P46.516) in unliquidated cash advances. 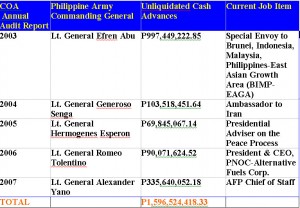 Bayan Muna Represesentative Satur Ocampo said, “The COA rendered an adverse opinion on the fairness of presentations of the consolidated financial statements of the Philippine Army for each year due to unliquidated cash advances for payroll and travel of officials, among many others.”

Ocampo challenged current Army chief Lt. General Victor Ibrado to ‘clean up the corrupt practices in most of the infantry divisions and brigades across the country that range from unliquidated cash advances, inappropriate use of these advances and the non-distribution of Combat Clothing and Individual Equipment (CIIE) in some of the Army’s biggest divisions.’

Ocampo criticized the Army for ignoring COA’s recommendations to correct the pattern of non-liquidation of cash advances. These include strict adherence to the COA rules on the grant, utilization and liquidation of cash advances (COA Circular 97-002) and imposition of penal/administrative sanctions to those who continue to neglect their obligation in accordance to Sec. 89 of PD 1445 (Government Auditing Code), COA Circular 97-002 and CSC Resolution 04-0676.

The legislator said the ‘unchecked bad practice of the Army affects the lower-rank and foot soldiers the most.’

He said that in 2007, the non-distribution of CIIE in the 5th and 7th Infantry Divisions (IDs) alone amounted to P5.77 million.

“This may be only the tip of the iceberg of AFP corruption. The House should consider inserting special provisions in the Army and AFP [Armed Forces of the Philippines] budgets, requiring them to accomplish these COA recommendations,” Ocampo said. (Bulatlat)