Two doctors, one an advocate of community-based health programs and the other a toxicology expert, said that corporate greed, import liberalization, and the lack of priority given by the government to local food production and to ensuring food safety are to be blamed for the entry of melamine-contaminated products in the country.

The reported presence of melamine in milk products as well as candies, chocolates, coffee drinks and other consumer goods using dairy products from China caused a stir among consumers during the past two to three weeks. Government agents raided stores at Divisoria, while supermarket owners refused to pull out any product from their shelves without any clear guideline from government regarding which products have tested positive for melamine.

The ensuing confusion among consumers and retailers alike prompted the Bureau of Food and Drugs to issue advisories and to release to the public the list of products being tested and eventually, a list of which products tested negative and which tested positive for melamine.

Melamine is an organic compound with 66 percent nitrogen. Combined with formaldehyde it produces a melamine resin, a very durable thermosetting plastic, which is used for producing plastic plates, house ware, countertops, dry erase boards, glues, fabrics, flame retardants, among others. 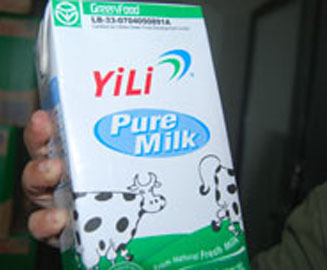 products. Melamine increases the nitrogen content of diluted milk; and because protein is also high in nitrogen, it makes it appear that the diluted milk is still high in protein and therefore, not diluted. The presence of melamine in food products is considered safe by the US Food and Drug Administration if it constitutes only 2.5 parts per million. But milk from China was found to contain around 520 parts per million.

In China, melamine-tainted formula milk reportedly downed 54,000 children, with kidney problems, and is being cited as the cause of death of four children.

Toxicology expert Dr. Romeo Quijano said that the measures being instituted by the Arroyo government in response to the melamine scare are short-sighted reactions that do not protect the health of consumers but perpetuates the pathetic state of affairs as far as food safety is concerned.

Quijano is a professor at the Department of Pharmacology and Toxicology, College of Medicine, in the University of the Philippines. He is also the president of the Pesticide Action Network (PAN)-Philippines.

Quijano said, “The government ridiculously tries to show it is doing something to address the problem by parading to the media hurriedly confiscated milk products, yet at the same time, it downplays the dangers by echoing a familiar corporate whitewash that humans will have to ingest unrealistically huge volumes of contaminated milk to be poisoned.”

In his paper titled “Melamine Poisoning: Tip of the ice cream,” Quijano said exposure to melamine and other chemicals is not new.

Quijano’s paper cited past incidents of exposure to melamine. In 1987, melamine was found in coffee, orange juice, fermented milk and lemon juice, originating from migration of melamine from the cup made of melamine-formaldehyde resin. From 1979 to 1987, there was widespread melamine contamination of fish and meat meals in Italy and in 2004, there was a nephrotoxicity outbreak in pets in Asia.

Nephrotoxicity is a poisonous effect of some substances on the kidney. In 2007, thousands of cats and dogs, mostly in the US, became seriously ill or died of acute renal (kidney) failure after eating pet food contaminated with melamine and related triazine compounds. Hogs, chicken and fish were also affected by contamination of melamine and cyanuric acid in their food. Cyanuric acid is a common disinfectant.