At stake in our fight against JPEPA is the protection and preservation of our natural resources and our environment, the defense against the exploitation and oppression of human labor against the Arroyo regime’s pimping of Filipino nurses, caregivers and skilled workers, the rightful claim of indigenous peoples to their ancestral domains, of farmers and workers to the dignity of labor, and the fortification of our citizenship as Filipinos against bilateral measures that intensify the barbaric nature of neocolonialism,” said CONTEND.

Various groups expressed outrage over the ratification of the Japan-Philippines Economic Partnership Agreement (JPEPA). The Philippine Senate ratified the treaty late at night of October 8.

Only four senators voted against the approval of the treaty. They were Aquilino Pimentel Jr, Ma. Consuelo ‘Jamby’ Madrigal, Francis Escudero, and Benigno ‘Noynoy’ Aquino Jr.

Members of the NO DEAL! Movement trooped to the Japanese embassy in Manila, Oct. 10 to show indignation over the JPEPA.

The NO DEAL! Movement is a broad alliance of organizations and individuals opposed to unequal economic agreements. 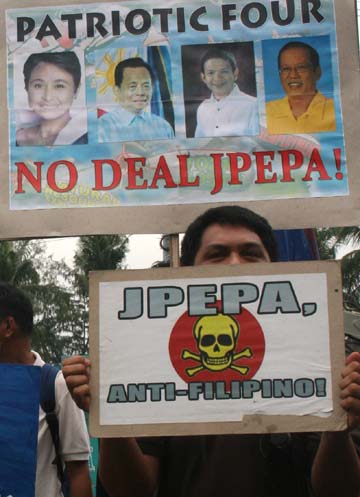 In a news article posted at the website of the Catholic Bishops’ Conference of the Philippines (CBCP), Kalookan Bishop Deogracias Iñiguez said, “Of course it’s very disappointing because the Senate decided to pass the JPEPA even if there were several provisions that would be detrimental to the Filipino people.”

Iñiguez is the chairperson of the Public Affairs Committee of the CBCP.

Meanwhile, the Health Alliance for Democracy (HEAD), an organization of health professionals, said, “The senators who ratified the patently onerous trade agreement have placed health personnel everywhere, even those not seeking work in Japan, in a very disadvantageous and vulnerable position.”

Dr. Geneve E. Rivera, HEAD secretary general, said, “Pro-JPEPA senators have institutionalized the commodification of health workers and professionals in a trade deal. They should be made accountable for this betrayal.”

Rivera added, “Parang ‘Bagsak-presyo’ ng mga nurses. (It’s like a rummage sale of nurses). This is the message that the Arroyo government and pro-JPEPA senators is sending to the world.”

Rivera said, “All health personnel working across the globe should make these pro-JPEPA senators feel their wrath by denouncing them in public and in the coming elections.”

The NO DEAL! Movement belied claims of Mrs. Gloria Macapagal-Arroyo and Trade Secretary Peter Favila that the JPEPA will cushion the impact on the country of the worsening US and global economic crisis. Arnold Padilla, NO DEAL! Movement spokesperson said, “The JPEPA will result in the further destruction and underdevelopment of the national economy. The short- and long-term impacts of the global economic crisis on the Philippines will be further magnified as the JPEPA starts its devastation of local jobs and livelihood and marginalize Filipino investors. The supposed benefits that will accrue from the treaty such as increased exports to Japan and more Japanese investment are false as our actual experience in the past decades of export orientation and foreign capital-driven economy clearly show.”

The HEAD also slammed Roxas’ assertion that ratifying JPEPA is both “timely and necessary” to keep the country ‘globally competitive.’ “If this was a race to the bottom, if this was an auction of Filipino nurses to the lowest bidder, then Sen. Roxas is right. Is this what he wants?” said Rivera.