In its position paper, women’s group GABRIELA said, “That migration leads to development is an outright lie. That migration of Filipinas can lead to women’s empowerment is a ludicrous notion…The truth is more and more women are being sold as domestic helpers, as entertainers, as caregivers and as mail-order brides in exchange for their dollar remittances.”

”The stark truth, as shown by the Philippine experience, is that women migrant workers find themselves in situations that are very disempowering,” the group maintained.

GABRIELA said jobs available to women are “mere extension of stereotype women roles as homemakers and as sex objects.”

“These are, in essence, gender-oppressive roles made to appear as formal work that place women in situations open to abuse and exploitation,” it said.

GABRIELA said the organization and collective actions of migrants and their families are their only hope for protection and better conditions. 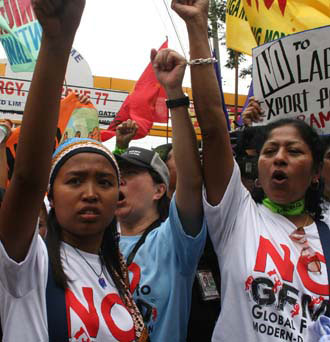 It added, “Women migrants must actively take part in the growing resistance against neoliberal policies by building women migrants’ organizations, strengthening their alliances with anti-globalization women’s groups and participating actively in people’s organizations in their own countries or their host countries.” (Bulatlat.com)