No compensation for OFWs laid off in Taiwan

In a confrontation outside the OWWA office, December 5, Albert Valenciano, an OWWA official told members of Migrante that the loans they incurred were their personal concern.

Asked what OWWA could provide the OFWs, Valenciano said, “Hindi lang OWWA ang pinag uusapan natin dito, ito naman po ay malaking problema, kasi ang apektado ay hindi lang OWWA kung hindi ang buong gobyerno. [Ang] DOLE ay tumutulong at iba pang sangay ng gobyerno na may kinalaman.” (OWWA is not the only concerned agency in this case; this is a big problem because the whole government is affected. The DOLE is helping out and so are the other government agencies.)

When asked if there are jobs for the retrenched OFWs, Valenciano said the OWWA has a referral system. He said skilled OFWs may apply to agencies so that they could work in other countries. 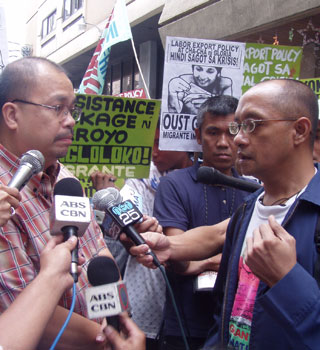 Valenciano said they could not work that out so easily.

Martinez then retorted, “Bakit kapag si GMA ang nagrequest, P530 million ($10,752,906 at an exchange rate of $1=P49.298), isang pirma lang?” (Why is it that when Pres. Gloria Macapagal-Arroyo is the one requesting for the release of the funds, it only takes one signature to release P530 million?)

Martinez said retrenched OFWs are demanding payment for the un-expired portion of their contracts. “OFWs are not the ones liable for the premature termination of their contract. The fact that they paid for their own airfare is already an injustice to them. It is utterly infuriating that DoLE Secretary Marianito Roque seems to be working only for the interest of the recruiters and employers,” decried Martinez.

Martinez said that government officials from OWWA and Department of Labor and Employment (DoLE) also promised other services such as legal assistance, and referrals for local employment through the PGMA One-Stop Shop Services, a program purportedly created for returning OFWs displaced by the global financial crisis.

Martinez expressed doubts that such promises will be fulfilled. He cited the case of stranded OFWs from the Middle East early this year who were also promised livelihood programs by the government but received nothing up to this moment. 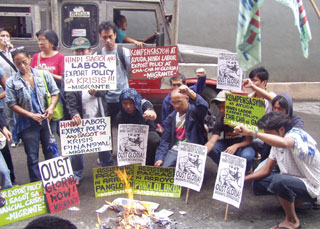 Migrante suggests that DoLE should immediately release the bonds posted by recruitment agencies to the POEA amounting to P1 million ($20.288) each from every recruitment agency. The group insists that the said bond should be used to compensate the laid off OFWs for their unfinished contracts.

“OFWs should not be punished for something, which is not their fault, and they should be compensated accordingly. Secretary Roque should stop protecting the recruiters. It is the OFWs who are paying for their salaries,” said Martinez.(Bulatlat.com)