Navarosa said they endured hardships and sacrifices. “Ulan, init, lamig, bagyo, nandito pa rin kami.”
(Rain or shine, we remained here. We braved the cold and heat and even typhoons.)

Navarosa continued, “Sa pinansya, laging kapos. Kahit puro utang, puro hirap, hindi kami magpapatalo sa management.” (We are always short on cash. Even if we acquired debts, even if we endure hardships, we will not bow down to the management.)

Gesto related he served as a shock absorber to his troubled co-workers, “Ang hirap…” (It was difficult.)

The hardest stage, he said, was during the first week of the strike. “Tinangka kaming buwagin noon.” (They tried to disperse us.) He added, “Isa pang mahirap noong Pasko at Bagong Taon. Nandito kami.” (It was also hard during Christmas and New Year; but we were here.)

Gesto said unity is the key to their victory.

Of the 73 dismissed workers, 53 opted to stay in the picketline. Four other workers who were not terminated joined them. “Kung mas marami ang pumasok, natalo na kami.” (If more workers opted to work, we would definitely lose this fight.) 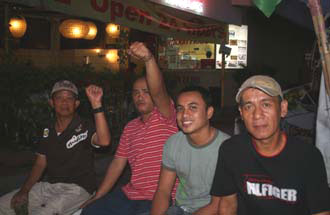 He said the management tried to lure them with offers of separation pay twice. The first offer was to pay them ten days per year of service. The second attempt, said Gesto was the for the same amount but payable within one year. “Lumala pa offer nila.” (Their offer became even worse.)

Roger Soluta, executive vice president of Genuine Labor Organization of Workers in Hotels, Retaurant and Allied Industries (GLOWRHAIN) of which the Kowloon union is a member, said “Matibay ang paninindigan nilang i-sustain ang picketline. They did not give in to the proposal of settlement by the management.” (Their determination to sustain the picketline is strong.)

Soluta said the experiences of the Kowloon union and that of the Bluestar workers and Triumph workers prove that unity is the best weapon of the workers.

The Bleustar workers, manufacturer of Advan shoes, were also victorious in September last year after two months of going on strike.

Gesto said they have been inspired by the youth who frequently visit their picketline. “Lumakas ang loob namin dahil sa suporta nila.” (We have been emboldened by their support.)

He recalled that in September last year, many students and youth flocked to their picketline. The youth formed a barricade around the Kowloon Restaurant premises. “Halos maiyak kami. Napalakas nila loob namin.” (We almost cried. They boosted our spirits.)

Navarosa said the fight is far from over. “Patuloy kaming maninindigan sa piketlayn hanggang mabalik kami sa trabaho.” (We will continue to defend the picketline until we have been reinstated.)

He said further, “Lalo pa naming palalakasin ang aming pwersa hanggang magtagumpay. Kaya namin silang [management] labanan sa pang-aaping ginawa nila sa amin.” (We will further strengthen our ranks until we achieve victory. We have the resolve to fight against the oppression they did to us.) (Bulatlat.com)