Sexual harassment experienced by women workers compelled them to form the union. For years, the company owner Jimmy Ong would ask the women workers to kiss him and touch his private parts.

Workers also complained of low wages. Casual workers receive only P248 ($5.27 at the October 5 exchange rate of $1=P47.04) per day, way below the prescribed minimum wage in the National Capital Region. Those who have been working for the company for 18 years get a measly average of P380 ($8.07) per day. They also complained of incorrect computation of overtime pay, night differentials and holiday pay. 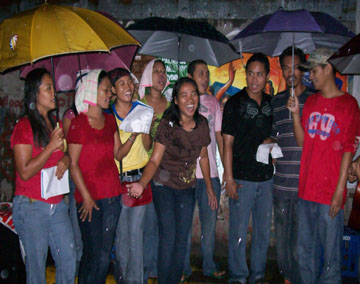 The workers were able to register the union on October 27, 2007.

Thirteen days before the certification election scheduled on July 25, the management halted factory operations and machines were shut down.

In an earlier interview with Bulatlat, Bongon said, “Nagbalak silang maglabas ng 25 makina, humarang kami sa daanan ng truck,” she related. (They tried to transfer 25 machines to another site but we blocked the truck.)

The workers suspected that the management attempted to establish a runaway shop.

The 58 workers involved in the blockade, including union officers, were immediately suspended and dismissed.

They held the picket protest for almost two months. They started their strike August 6 after the management dismissed the workers involved in union organizing.

In its decision Sept. 22, the National Labor Relations Commission (NLRC) ordered the reinstatement of all dismissed workers without conditions; the payment of unpaid salaries; and, recognition of the union, among others.

The NLRC also prohibited any retaliatory action by either of the parties.

The decision also stated that the management and the union should jointly set up a committee to handle cases of sexual harassment.

Under the Republic Act 7877 or the Anti-Sexual Harassment Law, a Committee of Decorum and Investigation (CoDI) must be in place to investigate and address complaints of sexual harassment.

Bongon said they have yet to see if such a committee would be formed. She said that Ong has not gone to the factory since they went back to work.

In her speech, Nitz Gonzaga, vice chairperson for women of the Kilusang Mayo Uno (KMU or_May First Movement) said the participation of women workers has been instrumental in the victory.

Gonzaga said, “Naging inspirasyon natin ang walang humpay na pagkilos ng ng ating kasamahang kababaihan lalo na sa unang gabi na hinarang nila ang kanilang katawan para hindi mailabas ang mga produkto at makinarya.” (The determined actions of the women workers served as an inspiration to all of us, especially when they blocked the gate with their bodies to prevent the management from taking out the products and machines.)

A fitting tribute to the struggle of the workers

Cultural groups rendered songs to celebrate the victory of the striking workers.

A short video prepared by Tudla Productions, an independent audio-visual group, was shown. It featured the struggle of the Bleustar workers from Day 1 of the picket protest until they went back to work on Sept. 23.

The Bleustar workers were obviously thrilled. They were laughing as they identified their colleagues in the video.

The stage’s backdrop was unveiled – a mural of Bleustar workers. It was painted by students and the youth who regularly visited the workers’ picketline. Most of them are members of Ugatlahi, a group of progressive visual artists.