Revival of Bataan Nuclear Power Plant a Source of Corruption?

Militant organizations in Central Luzon, Catholic Bishops, environmental groups, and scientists are one in saying that the planned revival of the mothballed Bataan Nuclear Power Plant is costly and unsafe. They surmise that the nuclear power plant, from which the former dictator Marcos and his cronies earned $80 million in kickbacks, is being revived to become another source of corruption.

Activists are gearing up for protests against the planned revival of the Bataan Nuclear Power Plant (BNPP).

In a telephone interview, Roman Polintan, chairperson of Bagong Alyansang Makabayan (Bayan) in Central Luzon, said they would launch a massive campaign against the proposed reopening of the BNPP.

In July last year, Pangasinan Rep. Mark Cojuangco filed the bill titled “Bataan Nuclear Power Plant Commissioning Act of 2008”. The bill has already been approved by the Energy Committee and is now pending in the Appropriations Committee. It has already gained 190 signatures in the House.

In December 2008, the Department of Energy through the National Power Corporation signed a memorandum of agreement with the Korea Electric Power Corp (Kepco) to conduct a feasibility study on the possible revival of the BNPP.

A Westinghouse light water reactor, it was designed to produce 621 megawatts of electricity.[2]

The BNPP was a project of former President Ferdinand Marcos. The BNPP construction began in 1976 and was completed in 1984 at a cost of $2.3 billion. The nuclear plant is located at the foot of Mt. Natib in Morong, Bataan. Marcos was toppled in 1986. The succeeding administration of Corazon Aquino decided not to operate the plant after citing 4,000 defects in its design and construction.

However, former President Aquino, rejecting the call of various sectors not to pay the BNPP loan because it is considered as onerous, stood pat in her decision to pay the loan. The succeeding administrations of Ramos, Estrada, and Arroyo likewise were adamant in paying the loan for the mothballed BNPP. The loan, amounting to P120 billion ($2,532,179,784 at the current exchange rate of $1=P47.39) including the principal and interest, was fully paid by April 2007

Polintan said that the BNPP is unacceptable to the people of Central Luzon. “It is not the ordinary people who will benefit from it but the foreign business corporations and their local partners.”
The activist leader joined the mammoth protests against the BNPP in the ’80s.

Polintan recalled, “Tens of thousands of residents of Bataan and nearby provinces joined the welgang bayan (people’s strike) against the BNPP.” 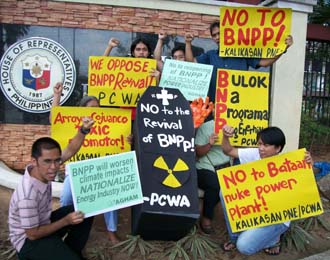 Scientists and environmentalists hold a picket in front of the House of Representatives to oppose the revival of the Bataan Nuclear Power Plant. (Photo by Ronalyn Olea)

He added, “People would come out from their houses to join the protests.”
“We call on the people of Central Luzon to once again act in unison and raise their voices to thwart this move [revival of BNPP].” Polintan said

Balanga, Bataan Bishop Socrates Villegas and Manila Auxiliary Bishop Broderick Pabillo said the plan of some lawmakers to re-open the BNPP would be met with opposition due to the risk the power plant poses to human life and safety.

Villegas in a text message said the nuke plant, based in Morong town, was already declared unsafe 30 years ago and it cannot be made safe by a mere congressional act.

Polintan welcomed the statements of Lingayen-Dagupan Archbishop Oscar Cruz, Balanga Bishop Socrates Villegas and Manila Auxiliary Bishop Broderick Pabillo. Polintan said they plan to get the support of other Church leaders in the region.