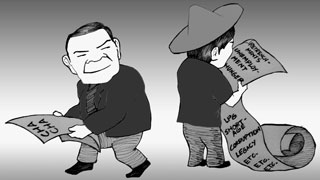 As the Filipino people are very much preoccupied with trying to survive through the economic crisis – manifested in, among other things, retrenchments, hunger, and shortage of basic goods and services – President Gloria Macapagal-Arroyo’s allies in Congress are taking advantage of the situation to sneak in their scheme to amend the 1987 Constitution. This could pave the way for the extension of term limits for public officials, including Arroyo herself.