You Are Here: Home → 2009 → February → 21 → Consumers Unite for Affordable Medicines, Say Too Many Loopholes Plague Law

A multisectoral consumers’ group was recently formed to assert the people’s access to safe, affordable, quality, and effective medicines. Its first move was to criticize the loopholes in the Universally Accessible Cheaper and Quality Medicines Act of 2008 or RA 9502.

John Montejo, a kidney patient, has been undergoing dialysis for seven years.

Montejo said that many of his ‘batch mates’ at the dialysis center died because they could no longer afford the treatment and medicines. “Sa 100 pasyente, lima na lang kaming naiwan.” (Out of 100 patients, only five of us have remained alive.)

Montejo is just one of the patients who joined the formation of a multisectoral consumers’ group intending to assert the people’s access to safe, affordable, quality, and effective medicines. 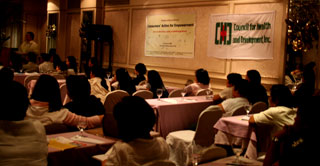 Doctor Eleanor Jara, executive director of the Council for Health and Development (CHD) and a member of the Consumers’ Action secretariat said that eight or nine out of ten Filipino patients could not afford to buy medicines. She added that the World Health Organization classified the Philippines as among countries where less than 30 percent of the population has regular access to essential drugs.