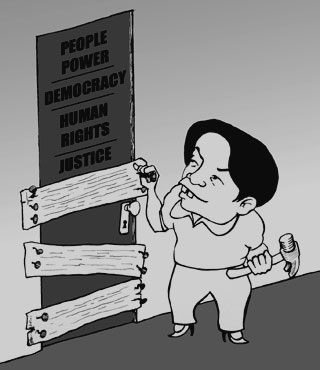 For the last several years, the Arroyo government has been receiving condemnation for its human rights violations especially the spate of extrajudicial killings and enforced disappearances. In 2006, it attempted to curtail civil liberties by declaring a “State of National Emergency” and it has been consistently trying to do so ever since. It has also been trying to use the courts by filing libel cases and trumped up charges to run after its perceived political enemies, debasing the justice system in the process. In sum, it has been trying to close the door on people’s rights and liberties and could have succeeded before the end of its term (a copycat of the late dictator Marcos) if the people have not protested strongly against such moves.