Women Most Affected by the Crisis

An independent research institute said that Filipino women are most affected by the economic crisis.

An independent research institute said that Filipino women are most affected by the economic crisis.

In its annual Usapang Lila (Purple Talk) held February 27 at the Balai Kalinaw in the University of the Philippines in Diliman, the Center for Women’s Resources (CWR) revealed the worsening situation of women workers, peasant women, ordinary housewives and young women.

Brenda Yasay, a researcher for CWR, said that seven to eight out of ten laid off workers in the export processing zones (EPZs) are women.

Women account for 72. 3 percent of the work force in the electronics and 86.5 percent in the garments sector.

Meanwhile, Merly Grafe, president of the Solidarity of Cavite Workers, said that many women workers in the EPZs receive a progressively decreasing income due to compressed work week schemes. Grafe said women workers are only allowed to work for two to three days per week.

“Siyempre, mas maliit ang kita. Karamihan sa kanila, kumukuha na ng sideline,” (The natural result is a decreasing income. Majority of women workers are taking sidelines to augment their income.) said Grafe. She said that women workers would offer cosmetic services such as pedicure and manicure even without the necessary skills.

In the agriculture sector, seven out of ten farmers are landless. Yasay said that peasant women are paid less compared to their male counterparts, showing data from the Bureau of Agricultural Statistics (BAS). 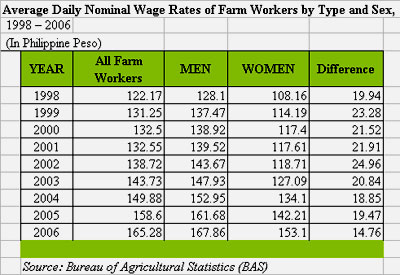 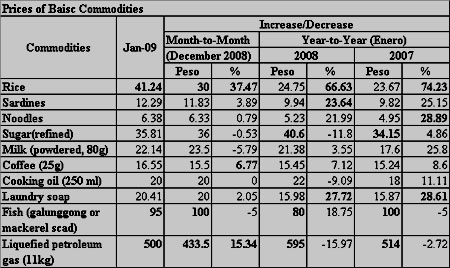 Considering the government’s priorities, Yasay said, it is not surprising that women’s health deteriorates. In the Philippines, there are 4,600 maternal deaths per year and 89,000 children under the age of five die yearly.

Alith Abaja, a member of Samahan ng Maralitang Kababaihang Nagkakaisa (Samakana – Association of United Poor Women) in Talanay, Quezon City, related that most poor families in their community only eat twice a day, every 11 a.m. and every 4 p.m.

Abaja added that at times, mothers would beg for bread from the neighboring subdivision. Usually, they are given expired bread. The mothers would then grill the bread so they would have something to eat.

Abaja said further that some families only eat lugaw (porridge) for the whole day.

Yasay said urban poor women would join game shows in television networks. Abaja confirmed this. “Pipila sila nang buong maghapon. Pagkain lang at T-shirt ang makukuha nila.” (They wait in line the whole day even if the only thing they get is a T-shirt and food for the day.)

Yasay also said that urban poor women are deeply indebted. “Baon talaga sa utang. Kapag may kita sila sa isang araw, pambayad lang nila ng utang para makautang uli.” (They are buried in debt. Whenever they earn for a day, they use it to pay their debts so that they could loan again.)

Abaja related that some of the women in their community take up laundry jobs in exchange for a kilo of fish and P50 ($1.02).

Yasay said the long-term solutions to the crisis would be genuine agrarian reform and national industrialization to generate jobs and increase the income of the masses.