About 30 million Filipinos living below the poverty-line hound the urban scene of modern-day Philippines. In the heart of Tondo, Manila, one can easily be acquainted with the images of destitute lives of thousands of men, women and children struggling amid the ever worsening situation.

Atop this place, one only has to turn around to see the blurred entirety of Metropolitan Manila: the bluish bay and the seemingly mighty harbor on the south, the soaring edifices that dominate the eastern skyline, the approaching highlands in the northern horizon. It creates an impression that everything is well in the country’s socio-political center.

Yet, glancing at the immediate surrounding, one can see – and even experience – the dismal realities that abound this place: sullied children ravaged by hunger, aging men and women scavenging for iron and metals, fields of dried corn and root crops, landfill burning and smoking among the rubbles of what the place used to be.

Everyone is familiar with this place: Smokey Mountain, the infamous dumpsite in Balut, Tondo. The foot of this mountain of garbage used to be the sordid locus of life of hundreds of impoverished families who were later thrown someplace else in the mid 1990s. Some did come back and rebuilt their shanties around the already consumed wasteland. 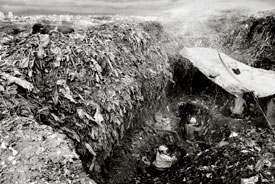 Scavengers of the Smokey Mountain dig the landfill for iron, metal scraps and other materials burried under . (Photo by Anthony Stabile)

Descending these steep hills, one can easily be acquainted with the familiar picture of modern-day poverty: a deteriorating government housing project, rows and piles of illegal settlers’ makeshift abodes, hordes of people engaged in odd jobs and illegal sidelines. Indeed, this place situated in the heart of Tondo, Manila, can offer a pungent foretaste of the seemingly intractable poverty the country has.

Today, about 30 million Filipinos living below the poverty-line hound the urban centers throughout the country. In the National Capital Region (NCR) alone, there are about 3.4 million urban poor living in the slums and other impoverished areas, according to the Asian Development Bank.

As the current global financial crisis hits hard on the local economy, their lives plunge even deeper to the miserable depths of poverty.