IFI Priest Unfazed by Threats from the Military

Rev. Fr. Dionito M. Cabillas or Fr. Diony to his parishioners and colleagues, received information that he was included in the ‘top ten’ of the military’s order of battle.

On March 12, at around 8:25 a.m., Fr. Rex Reyes, Jr., general secretary of the National Council of Churches in the Philippines (NCCP), received a text message from another priest inquiring if there is any truth to the news that Rev. Fr. Dionito Cabillas of the Iglesia Filipina Independiente (IFI or Philippine Independent Church) had been “arrested in Manila for a rebellion case.” 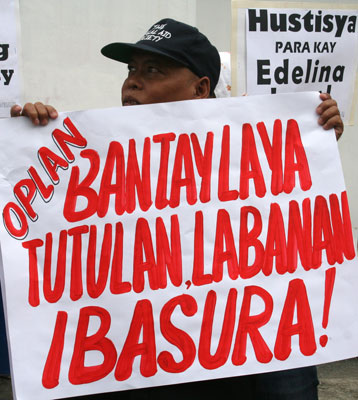 The priest, from the same church as Fr. Diony and based in Negros, said that his Bishop received the information from a retired IFI priest and former chaplain in the Armed Forces in the Philippines (AFP).

The former chaplain claimed the news was aired on March 9, 2009 in a local television network He informed the bishop and the priest that Fr. Diony is “blacklisted” by the military and that the latter is in the “top ten” in the military’s “order of battle”.

An order of battle is defined by the dictionary as the organization or hierarchy of military forces in preparation for a battle or a planned sequence of deployment of military units in a battle. In local military usage, it is a list of targets for “neutralization”.

Fr. Diony was surprised because he has no knowledge of any rebellion case filed against him.

Fr. Diony told Bulatlat in an interview that it would be difficult for them to verify the inclusion of his name in the order of battle because the military often denies that they keep such a list.

Fr. Diony described the situation in Negros Occidental, a priority area in the counter-insurgency campaign of the Arroyo administration. He said that the massive deployment of troops in the island also led to the increase in the oppression of church people who are active in human rights work.

Fr. Diony related that Fr. Romeo Tagun, a priest based in Negros and an active member of the Promotion of Church People’s Response (PCPR), also received information that he was included in the military’s order of battle.

He added that Fr. Romeo Tagun also joins fact-finding missions of Karapatan (Alliance for the Advancement of People’s Rights). Fr. Diony said that Karapatan members in Negros have been constantly harassed by the military. At one time, Fr. Diony said, the soldiers even burned an effigy of Karapatan Spokesperson Fred Cania.

Fr. Diony said that priests and other church workers who openly criticize the military’s human rights violations and the Oplan Bantay Laya are persecuted.

This is not the first time that Fr. Diony faced persecution for his strong human rights advocacy.

In 1993, during his ministry among the poor in Magsaysay, Lanao del Norte, the military arrested and detained him for six days.