In a press conference, Makabayan co-chairperson and economist Maita Gomez declared the coalition’s support for at least four candidates for the Senate.

“As of now, we are proposing at least four possible candidates for the Senate. (They are) public officials with clean track records in government and a long history of leadership and public service. Patuloy silang pinagkakatiwalaan ng masa dahil itinataguyod nila ang pulitika ng masa,” (They continue to enjoy the trust of the masses because they advance the politics of the masses.) Gomez said.

Ocampo said the coalition is still scouting for other possible candidates who are willing to embrace Makabayan’s patriotic and pro-people orientation.

Ocampo also announced the formation of two new party-list groups under Makabayan – the Alliance of Concerned Teachers (ACT) Party-List and the Confederation for the Unity, Advancement and Recognition of Government Employees (Courage) Party-List. 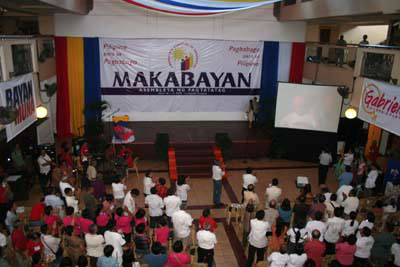 Genuine representation in Congress, Gaite said, will echo the demands of the sector including the P3,000 ($62.93 at the current exchange rate of $1=P47.67) salary increase, security of tenure, right to union/association and the like. “We will also help in articulating the nationalist demands of the people such as the abrogation of the Visiting Forces Agreement (VFA) and opposition to Charter change,” Gaite said.

In a taped message, Jose Maria Sison, speaking as chairperson of the International League of Peoples’ Struggle (ILPS), said, “Makabayan is a formidable combination of patriotic and pro-people forces in comparison to the fractious state of the traditional political opposition. Even at this very moment, it can be described as the strongest opposition force in terms of being the most principled instrument of the people, having the most cogent patriotic and progressive platform, gathering the most dedicated and most active volunteers in the service of the people and enjoying the strongest and most reliable mass base on a nationwide scale.”