A Critique of the Economic Resiliency Plan: Why Arroyo’s P330-Billion ‘Stimulus’ Package Will Not Solve Joblessness

Will the ERP mitigate the displacements?

In response to the massive dislocations of OFWs and local workers, the Arroyo administration came up with the CLEEP to “save and create jobs.” Government estimates that the program could generate at least 800,000 jobs. (See Table) 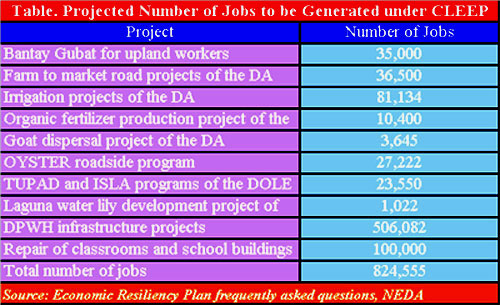 As of February, Malacañang reported that the CLEEP has already created 70,000 jobs nationwide. But even if government achieves its target of 800,000 jobs under the CLEEP, it will still fail to even mitigate the rapid displacements of workers. Note that the labor force grows every year by an average of 900,000 while the number of jobless workers, even before the global recession, grows by 90,000 a year.

Statistically, they may “mitigate” job losses as reflected in the Labor Force Survey (LFS) of the National Statistics Office (NSO). The LFS simply asks if a worker is employed or has a livelihood but does not probe the duration of employment. More, CLEEP’s temporary jobs will cater, theoretically, to those who are displaced by the global crisis, not to the usual 4 million plus jobless workers the country has in the pre-recession years.

Overall, the ERP does not modify, but in fact continues, the flawed basic orientation in job generation of current and past administrations. Out of 800,000 target jobs under CLEEP, for instance, more than 500,000 will come from infrastructure projects of the Department of Public Works and Highways (DPWH). Most of these jobs and the other CLEEP targets, meanwhile, are aligned with the priority projects of the Super Regions.

The Super Regions, first unveiled by Mrs. Arroyo in her 2006 State of the Nation Address (SoNA), aims to attract foreign investments for export zones, mining, BPOs, agribusiness, etc. Thus, in terms of long-term employment, it will further undermine domestic job generation as local industries and producers are further marginalized.

Meanwhile, the domestic job crisis is mitigated only through labor export, which under Mrs. Arroyo has been officially proclaimed as government policy for job generation. OFW deployment has now already reached one million per year, or almost three times the volume of annual deployment during the Aquino administration.

Despite its vulnerability as a means to generate jobs as shown by the current recession, the Arroyo administration continues to promote labor export. In fact, it is one of the job creation/preservation tools of the ERP. DoLE is mandated under the ERP to assist displaced OFWs by redeploying them to other emerging markets and identifying and developing new market niches, among others.

For affected workers in the export sector, the DoLE has established quick response teams (QRT) in its regional offices to devise an early warning system on possible displacements. It has been busy as well in organizing job fairs in various parts of the country such as the Jobapalooza last Labor Day.

But because jobs created by the economy are in the main dictated by foreign investments like BPOs and tourism, available employment at these job fairs are usually detached from the actual needs of the domestic labor market. While government hypes the number of potential jobs, it does not report how many workers were actually hired in these job fairs and how many were turned away due to jobs and skills mismatch.

If the Jobapalooza turnout is any indicator, it appears that a very small portion of the supposed available jobs translates to actual employment. Initial media reports say only 7,000 workers were hired on the spot during the Jobapalooza. If accurate, that figure is only less than 3 percent of the much-advertised 250,000 jobs that the activity was supposed to provide.

Worse, DOLE, unable to create a reliable job generation plan, has further legitimized labor flexibilization in the guise of preserving jobs. Under the ERP, it is actively promoting shortened work shifts, rotating forced leaves and other flexible labor schemes. These are contained in DoLE’s Advisory No. 2 which gives all employers more leeway to undermine the job security of their workers.

Flexible work arrangements must have the consent of affected workers, according to the said advisory. The issue however is that existing policies have already created an environment favorable to employers. The DOLE, by promoting flexible work, even if based on certain conditions, reinforces such environment that is hostile to workers.