Waiting for the Dead

BY JUAN ANGELO A. HONGO
Bulatlat

With over ten thousand OFWs stranded in different countries, 41 migrant victims in death row, and over 23 mysterious deaths of migrants, could the Arroyo administration be far from being tagged as a “migrant killer”?

One of them is Emy Pepito. With dreams of having a better life and providing the needs of his mother and nieces, he left the Philippines, went to the Kingdom of Saudi Arabia and worked as a stone mason. But his dreams turned into a nightmare come November 12, 2008, his fourth day in Saudi Arabia.

The ‘accident’, a recall 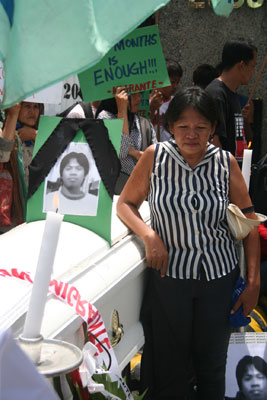 Emy Pepito’s mother Elizabeth stands by the coffin of his son sans the body. The ‘wake’ was held at the main gate of the Department of Foreign Affairs (DFA) to show the family’s six months of agony waiting for the remains of their beloved Emy.(Photo by Juan Angelo A. Hongo/Bulatlat.com)

Pepito, who was recruited by Gemini International Recruitment Agency, worked as a stone mason in Saudi Arabia. But roughly four days of working there, an ’accident’ caused his death. According to reports, Pepito’s body was buried alive in sand mixed with boiling asphalt while working on a building’s foundation. He was rushed to the hospital, but to no avail. Pepito was declared dead-on-arrival.

Mrs. Elizabeth Pepito, Emy’s mother, narrated that the death of his son was delivered by a friend, who also worked in Saudi Arabia.

“Tumawag pa siya bago noong araw na bawian siya ng buhay. Uuwi daw siya para sa graduation ng pamangkin niya. Hindi ko talaga inaasahan ang nangyari, (He even called up the day before he died. He told me he‘ll be home for his niece‘s graduation. I never expected that something like this would happen)” Elizabeth narrated in the Visayan language.

Now, it has been six months. Six months of agony, six months of waiting. The family holds onto what they call ‘help’ from the government.

Garry Martinez, Migrante Chairperson, stated that until the Arroyo Administration holds the highest power in the country, the future of OFW’s is dark. 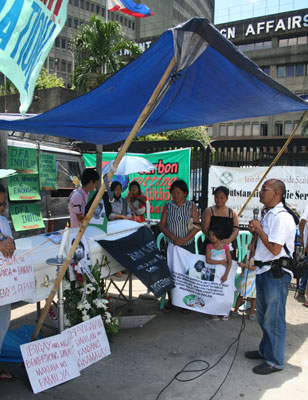 Garry Martinez, chairperson of Migrante International, blames the Labor Export Program of President Arroyo for the worsening conditions of the Filipino migrant workers(Photo by Juan Angelo A. Hongo/Bulatlat.com)

“May namamatay, may kinukulong, at may papatayin na Pilipino sa ibayong dagat. Tanngapin niya ang isang katotohanan na kailan man, ang Labor Export Program ay hindi magbubunga ng kumara sa bansang Pilipinas. Tanging trabaho sa sariling bansa at tunay na reporma sa lupa ang sasagot sa krisis,” (Some would die, some would be imprisoned, and some would be killed while working abroad. Let us accept one truth that the Labor Export Program would never result in the development of the country. Only through generating local employment and a genuine agrarian reform program would the crisis be solved.) Martinez stated.

The six months of waiting of the family for Emy’s body proved to be the longest wait in the life of Charito and her mother. Constantly seeking assistance; traveling back and forth from their province in Misamis Occidental to Manila to follow up the case before the Department of Foreign Affairs. But with every visit they make at the DFA, all they are getting is the same answer: “pa-follow up nalang po after two weeks”. (Follow us up in two weeks.)