If government will subsidize, say, 50 percent of the cost of inputs, the farmers’ net income will increase more dramatically. Under such scenario, the losses of landless and indebted palay farmers would be reversed by P984 ($20.83) to P1,095 ($23.18) per day.

In absolute terms, genuine agrarian reform can give palay farmers in Southern Tagalog a daily net income of P282 ($5.97) to P357 ($7.56) for every hectare. It will totally reverse their losses of as much as P738 ($15.62) per day when under tenancy and indebted under usurious terms. (See table for a summary of the figures and estimates cited.) 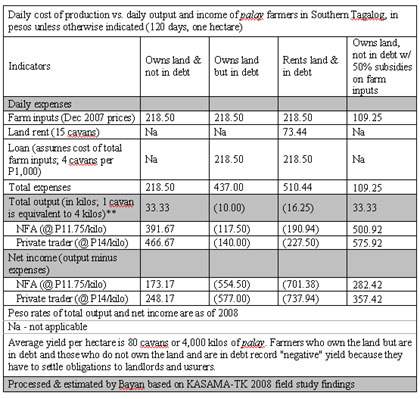 These estimates assume the reform will come in a complete package of free land distribution with support services and subsidies to remove palay farmers’ vulnerability to usury.

Overall, there are around two million palay farmers in the Philippines. If 70 percent of them are landless and heavily indebted, genuine agrarian reform will benefit 1.4 million palay farmers or 7 to 8.4 million people nationwide. Around P750 million ($15.88 million) every day will be made available for consumption in the domestic economy. (Fast Facts on Rice” excerpts from 101 Facts about rice in the Philippines by V. Bruce J. Tolentino et al, Nov 2001), accessible at http://www.abs-cbnnews.com/storypage.aspx?StoryId=113366 )

And we have only looked at one agricultural subsector. The reality is that in many areas involving various crops, land rent is much higher and loan terms are more usurious. Furthermore, when farmers no longer face perennial bankruptcy, they will have more incentive to increase farm productivity.

Imagine then the enormous amount of additional income that can be generated and the resources that can be freed up when genuine agrarian reform is implemented nationwide and across agricultural sectors.

From a moral and social justice standpoint, this will allow farmers to benefit from the fruits of their labor and improve their quality of living. From an economic standpoint, this will pave the way for a more equitable distribution of wealth. In the process, it will improve the buying capacity of a great majority of consumers in the country and thus help stimulate economic activity. (Bulatlat.com)