By GLAIZA MAY MUZONES
and JOSETTE EMILY DE JESUS
Bulatlat

MANILA — With six children and an extended family to fend for, Edna Espinosa has already conditioned her children that the highest education they can achieve is high school.

“Even if I wish they could finish college, we cannot really afford it,” Edna said in an interview with Bulatlat. Considering that her husband doesn’t earn much with his job as a plumber, Edna seeks the help of her children for their daily expenses.

Glenn, one of the two children of Edna who was able to get to college, said that after graduating from high school, he had to stop schooling for three years and work as a dishwasher in a restaurant so he could send himself to school. At 26, he took up a computer-technology course at STI College, with a tuition of P20,000 (about $422) per semester. Earning a measly amount of P4,000 ($84) a month, he wasn’t able to enroll himself this coming semester because of the increase in tuition. From P20,000, the tuition soared to P25,000 ($527), excluding other expenses for school projects. He should have been in second year.

Glenn is among many Filipino youth who cannot afford the increasing cost of education due to incessant tuition increases every year. The dropout rate has worsened over the years as school-aged children are compelled to work and help their parents earn money for their family’s daily expenses. 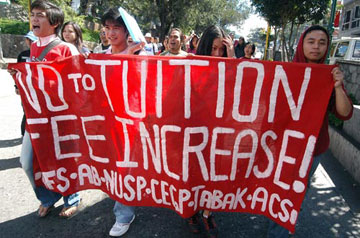 Students in Baguio City in a protest Saturday against high tuition and other fees. (Photo by Andy Zapata Jr.)

Based on 2008 data from the Commission on Higher Education (CHEd), out of 100 Grade One pupils, only 66 finish Grade Six. Only 58 of the 66 go on to enroll in first-year high school and only 43 finish high school. Of the 43 who finished high school, only 23 enroll in college and only 14 of the 23 graduate from college.

“The average tuition rate both at the national level and in the National Capital Region (NCR) has doubled under the Arroyo administration,” Kabataan Rep. Raymond Palatino said in a privilege speech on May 18 titled, “The Tragedy of the Philippine Education.”

Based on its own monitoring, the National Union of Students of the Philippines (NUSP) cited several schools in Metro Manila that will increase their tuition this coming school year amid the global financial crisis and despite appeals from CHEd. Among these are Lyceum of the Philippines, with a five-percent increase in tuition and another five-percent increase in miscellaneous fees; University of the East, five-percent tuition increase; Far Eastern University, six-percent tuition increase.

Palatino criticized the practice of some schools to get profit even without increasing tuition. “A school can forgo tuition increase and they can boast that there is no tuition hike. But it does not say that there is an increase in miscellaneous fees, in superfluous and exorbitant fees,” Palatino said in an interview with Bulatlat.

“Such tactic has proven to be very profitable to school owners. Unlike tuition, miscellaneous fee of all sorts are not included in the tuition increase consultations provided under CHED Memorandum No. 13, the guidelines for tuition hike applications, which was recently re-implemented following the lifting of the tuition cap,” Palatino said in his speech.

“In our country, education is a big business,” the NUSP said in its primer on the state of Philippine education.

Palatino asserted that high cost of education does not guarantee good quality education. “Most private schools are profit-oriented diploma mills. They exist for profit. They only give out diplomas and make students their milking cows.”