MANILA — As politicians declare their intention this early to run for the 2010 presidential elections, all promising “change” and filling the airwaves and other public venues with their takes and commentaries – wanted or unwanted – on various issues of the day, a new movement has been launched that aims for genuine political and social change.

The movement calls itself Pagbabago! People’s Movement for Change. It held its initial meeting last March and its founding assembly took place last May 26 at the University of Makati. Between March and May, Pagbabago was able to weigh in on on issues such as the overturning by the Court of Appeals of L/Cpl. Daniel Smith’s conviction in relation to the Subic rape case, as well as the filing of “harassment suits” against critics of the Arroyo regime.

Pagbabago describes itself as “a new movement that gathers concerned citizens who desire a more meaningful change in our society; not just a change of leadership in government but a decisive break from the poverty-ridden, unjust and corrupt social system that grew worse even after two (Edsa) uprisings.” The new movement commits that it “will be bringing these individuals and groups into a more coherent and cohesive movement for change, one that is not just issue-based but carrying a comprehensive reform program; a movement that addresses the underlying problems of Philippine society and resonates with our people’s most deeply-held aspirations.” 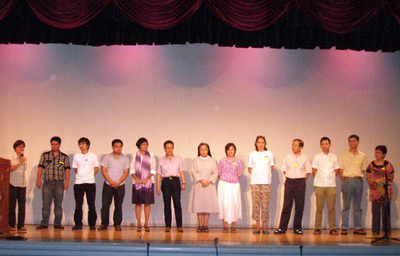 In an interview, University of the Philippines (UP) professor Roland Tolentino, who is one of Pagbabago’s spokespersons (the other is screenwriter Bibeth Orteza), said the movement’s objectives are expressed in its 11-point program, which “encompasses the things that address the basic problems and issues of the country.”

Pagbabago’s 11-point program, which it also calls the “People’s Agenda for Change,” is as follows:

· Demand good governance: promotion of economic well-being and welfare of the people; provision of essential services; poverty alleviation; just and decisive resolution of the country’s debt problem; responsible stewardship of public funds and resources; leadership by example; effective peace and order measures while curbing abuses of the police and military.

· Work for the creation, development and protection of domestic industries to generate local jobs and uplift the people’s livelihood, produce goods for local consumption and lead to self-reliance and all-round economic progress.

· Work for a just and lasting peace by addressing the underlying roots of armed conflicts; call on parties in contention to persevere in peace negotiations.

· Advance the struggle for equality of women in all spheres of endeavor and support efforts at ending violence against women.

· Advance a cultural environment that is patriotic, upholds the common good and emphasizes service to the people.

· Oppose unbridled exploitation of the country’s natural resources; work for environmental protection and uphold development that preserves the national patrimony.

· Defend the country’s sovereignty and territorial integrity against foreign intervention; uphold friendly relations with other countries on the basis of mutual benefit, non-aggression and non-interference in each other’s internal affairs.

· Uphold the democratic rights and legitimate struggle for cultural identity and self-determination of the Moro people and all indigenous peoples.