By GLAIZA MAY G. MUZONES
Bulatlat

MANILA — Students from various schools and universities greeted the opening of classes today, June 1, with a protest rally against soaring tuition and school fees. The protesters, alarmed by the continuing increase of dropout rates amid the economic crisis, called on the Arroyo administration to address problems in education.

Members of progressive youth groups including the College Editors Guild of the Philippines (CEGP), Kabataan Partylist, National Union of Students in the Philippines (NUSP), Anakbayan, League of Filipino Students, and students from different educational institutions gathered in front of the University of Sto. Tomas along Espana and marched toward Morayta. 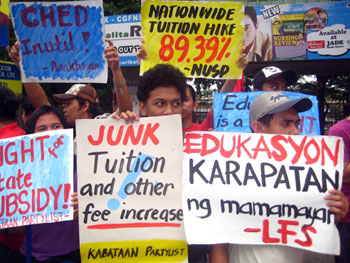 “We are scandalized by the idea that students, upon their return to school, are faced with an increase in tuition, old and damaged facilities, and an increasing number of students dropping out of school this year. There is a need to address the crisis in education and reform the educational system,” Anakbayan chairman Ken Ramos said in a speech.

“Under the Arroyo administration, the national average tuition rate has increased by as much as 89.93 percent, from P230.79 in school year 2001-2002 to P437.10 last school year. The National Capital Region average rate, on the other hand, went up by a whopping 94.54 percent, from P439.59 to P855.20 in the same period,” Kabataan Rep. Raymond Palatino said in a statement distributed during the demonstration. 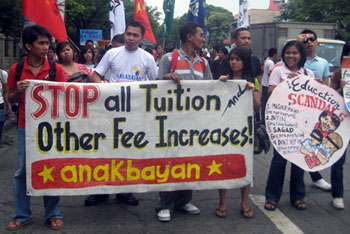 With Metro Manila having the highest average tuition rate per unit of P855.2 for the school year 2008-2009, students are paying P17,959.20 every semester for the tuition alone in a regular 21-unit load.

Citing data from the Commission on Higher Education (CHEd), Einstein Recedes, executive vice president of NUSP, said that out of 100 Grade One pupils, only 14 graduate from college.

“If janitors are required to at least have high school education, how can those who do not have any education — because of lack of financial sources, because of the government’s negligence of the education sector — find jobs?” Recedes said in an interview with Bulatlat. 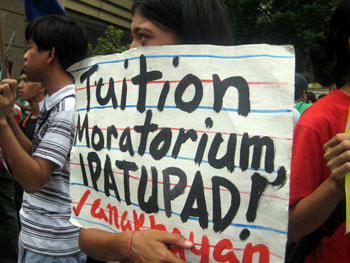 (Photo by Glaiza May Muzones / bulatlat.com)

The CEGP also expressed its concern about the repression by school administrators of school publications that report on tuition and other fee increases. The alliance reported that they have documented 254 cases of campus press freedom violations.

CEGP national president Vijae Alquisola said student journalists are either threatened by the administration with disciplinary actions or attacked through other means such as withholding of funds or non-mandatory collection of publication fees.

“How are campus publications expected to publish news the students need to know if the administration keeps on breathing down their necks?” Alquisola said. 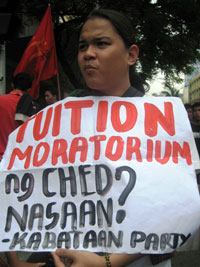 (Photo by Glaiza May Muzones / bulatlat.com)

According to Palatino, the government falls short of the budget allocation in the education sector.

The protesters support House Bill No. 2440 titled “An Act Imposing a Three Year Moratorium on Tuition and Other Fee Increases on All Educational Institutions,” principally authored by Bayan Muna Rep. Teodoro Casino Jr. and co-authored by Palatino.

The three-year moratorium on tuition hike will serve as a temporary relief for students in accordance with the estimate of the National Economic Development Authority (NEDA) that the current economic crisis would last for three years. (Bulatlat.com)