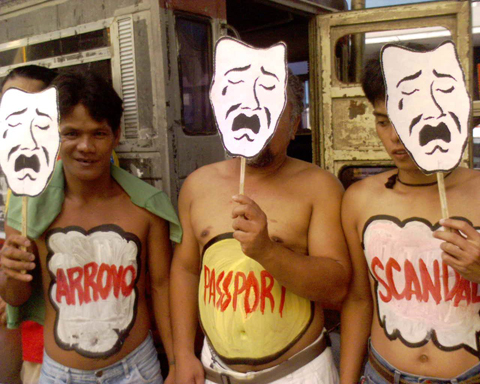 Members of the Anakpawis party-list group trooped to the Manila Regional Trial Court Branch 46 on Friday to demand a favorable ruling on a legal case they filed last March 30. They filed a Mandamus and Prohibition with application for Temporary Restraining Order and/or Preliminary Injunction in line with the alleged irregularities and anomalous transactions in the production of the e-passport by the Department of Foreign Affairs (DFA) and the Bangko Sentral ng Pilipinas (BSP).

Anakpawis Rep. Joel Maglunsod said that the e-passport scandal costs the Philippines around P859.7 Million in taxpayers’ money and the agencies and companies involved are getting away with it since 2007.

“Are we funding the pockets of the executives of the Department of Foreign Affairs and the Bangko Sentral ng Pilipinas? Will the French beneficiaries of this anomalous deal run away with our hard-earned money?” (Photo courtesy of Anakpawis)