You Are Here: Home → 2009 → July → 4 → Activist Doctors in Davao Worry Over Their Safety After Colleague’s Killing

Dr. Rogelio Peñera, an AH1N1 expert with the health department who was killed on June 24, was also active in a group of progressive doctors who provide basic medical services to the poor. Five of his colleagues at the Davao City-based United Integrated Health Services Foundation are included in the military’s order of battle.

By GERMELINA A. LACORTE
Davao Today

DAVAO CITY — Peers of the doctor who was summarily executed in this city late last month have expressed alarm over extrajudicial killings in the Philippines, which, according to them, no longer spare doctors and health workers who provide services to the poor.

Dr. Jean Lindo, chairperson of the doctors’ group Rx for Peace, said the death of Dr. Rogelio Peñera, an epidemiologist of the Department of Health (DOH) who was actively involved in the campaign against the AH1N1 virus, is a big loss not only to his family but to all people in the region already suffering from lack of access to affordable medicines and the services of committed health professionals.

“We grieve over the unacceptable loss,” Lindo said. “Amid the exodus of doctors out of the country, he was among the few who opted to stay. But what did he get? He got killed in return,” she said. 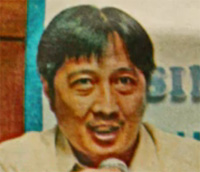 Lindo said the killing of Peñera has raised the concerns of their colleagues over the safety of six other physicians identified in the military’s order of battle (OB) earlier leaked by Bayan Muna Rep. Satur Ocampo to the media. The six physicians named in the list included Dr. Ruben Robillo, Dr. Jose Lacuesta, Dr. Shalom Lorezana, Dr. Eugene Nalian, and Dr. Rey Lesaca.

Major General Reynaldo Mapagu, commanding officer of the 10th ID, however, said no such list existed and that it was only a “concoction” of Ocampo. Ocampo refused to disclose the name of the soldier who gave the PowerPoint document to him earlier last month.

Lindo said the Philippine Medical Association (PMA) plans to call a meeting with the Armed Forces of the Philippines (AFP) to clarify what is in the document.


In this video report, Dr. Jean Lindo, chairperson of the doctor’s group Rx for Peace, demands justice for Dr. Rogelio Peñera, the epidemiologist gunned down by unidentified men on June 24 in Davao City. (Video by davaotoday.com)

Unidentified gunmen killed Peñera on June 24 while he was on his way home after fetching his 15-year-old daughter. Police said Peñera sustained several gunshot wounds in his head. His daughter was also reported to have been hit and was treated at the Davao Medical Center.

The killers were on board two motorcycles. They fired their guns at the doctor, who was inside his blue Honda Civic. Empty shells of .45 caliber pistols were recovered at the crime scene.

Peñera was a board member of the United Integrated Health Services Foundation, a group of health professionals included in the military’s OB. He was also a council member of the Bagong Alyansang Makabayan (Bayan), another group identified in the list.

Aside from being a government doctor, Peñera was active in opposing government programs that could limit people’s access to health, including the privatization of government hospitals and the streamlining of government bureaucracy that limits the number of health workers.

Peñera was also one of the few doctors trained to handle and monitor possible outbreaks of AH1N1, dengue, malaria and other diseases known to afflict depressed communities. “We have not known him to have enemies,” Lindo said, “He was a level-headed individual.”

“His work as epidemiologist brought him to the communities where the people are,” Robillo, a colleague, said. “It’s so ironic that such a peace-loving individual died so violently. If this is a warning for us health workers, I don’t think it will work. We’re not cowed just because of the killing,” said Robillo.

“Our commitment is to the communities and the underprivileged. That is our oath,” Robillo added. “No amount of political killing can stop us from doing our work.”
“It (the killing) is a violation of the international humanitarian law,” said Lindo. “We are physicians and are noncombatants. We are only engaged in saving lives.” (Germelina A. Lacorte / davaotoday.com) (Bulatlat.com)