You Are Here: Home → 2009 → July → 19 → UP Continues to Deny Tenure to Professor; Colleagues Cry Academic-Freedom Violation

Listen to Sarah Raymundo talk about her case

MANILA — The University of the Philippines is regarded as an institution where academic freedom is at its best. Ironically, the case of one of its professors, Sarah Raymundo, seems to go against the grain of the university’s liberal tradition.

Raymundo has been teaching at the university for 10 years, starting out as a lecturer in 1999 in the Department of Sociology, College of Social Sciences and Philosophy (CSSP). In February last year, she submitted an application for tenure to the tenured faculty of the sociology department through then chairperson Dr. Clemen Aquino.

More than a year since then, and after her contract expired on May 31 this year, Raymundo was told her application was still under review. In response to her lengthy letter inquiring about her application for tenure, UP Diliman Chancellor Sergio Cao responded with a short letter informing her that a decision had yet to be made. 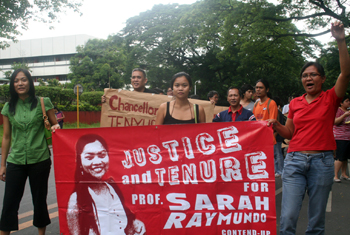 Prof. Randy David, the officer in charge of the department, has verbally informed Raymundo that she is technically no longer a faculty member of the Department of Sociology despite her open case for tenure.

Raymundo’s colleagues at the Congress of Teachers/Educators for Nationalism and Democracy (Contend), where she serves as the secretary general, and the All UP Academic Employees Union (AUPAEU) believe that there is a political reason for the delay in the decision regarding her permanent status in the university.

Dr. Ramon Guillermo, president of the AUPAEU, said, in an interview with Bulatlat, that Raymundo has met and even exceeded the minimum requirements for tenure.

These include at least a master’s or an equivalent professional degree, satisfactory or better teaching performance, sole or lead authorship of an article published in a refereed journal (local or international) or academic publication by a recognized academic publisher.

“There is no sane reason why she (Raymundo) should not be given tenure,” Prof. and Akbayan Rep. Walden Bello, who also teaches at the CSSP, said in a forum last week.

“She’s one of the best we’ve had in years,” Bello said of Raymundo. He said the majority in the department adopted an extremely wrong stance with regard to Raymundo’s tenure application. The university, he added, must value its junior faculty because they are the ones who reinvigorate the departments. 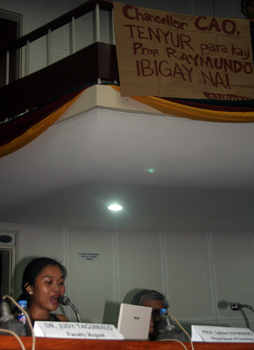 Sarah Raymundo during a forum in UP on her case. (Photo by Ronalyn V. Olea/ bulatlat.com)

Guillermo asserted that the university must decide based on academic requirements. “Not doing so is a violation of academic freedom,” he pointed out.

Dr. Judy Taguiwalo, UP faculty regent, said departmental autonomy could not be used to violate the rights of individual faculty members.

Taguiwalo said Section 5 of the 2008 UP Charter upholds academic freedom as both an institutional and an individual right and Article 178 of the UP System Code spells out the principles of academic freedom. These, she said, are consistent with the United Nations’ International Covenant on Economic, Social and Cultural Rights.