Gabriela Women’s Party, the National Council of Churches of the Philippines, and ABS-CBN Foundation-Gawad Kapamilya distributed one thousand bags of rice, canned food, drinking water and other items to victims of Barangay Bagong Silangan in Quezon City Monday afternoon. 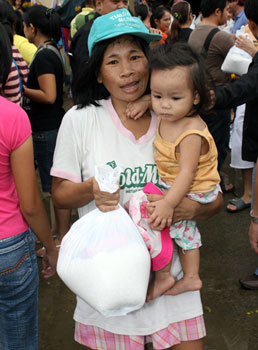 An Ondoy survivor in Bagong Silangan showing the relief goods she received. (Photo by Raymund B. Villanueva / bulatlat.com)

Meanwhile, the Citizens’ Disaster Response Center (CDRC) started receiving donations in their Quezon City headquarters Monday morning. Residents from the upscale Times Street neighbourhood as well as Center for Volunteerism in the Philippines (CERV-Philippines) volunteered to repack relief items into plastic bags for distribution on Tuesday.

CDRC Advocacy and Campaign officer Dakila Aquino said that they have already identified “priority areas” where they would be sending the relief goods that they have collected.

“As much as possible, we wanted to reach out to everyone but we have limited resources. We are in need of donations such as rice, dried fish, monggo beans, medicines, clothes and blankets,” Aquino said.

Even consumer advocacy group TXTPower has solicited donations for victims of Ondoy. As of 3:25 pm of Sept. 28, TXTPower received almost P600,000 monetary donations. All donations will be turned over to the Philippine National Red Cross. 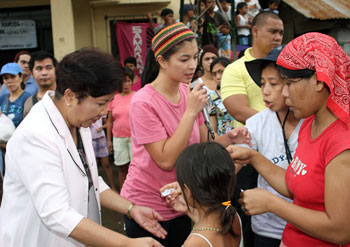 Health advocacy groups formed the Samahang Oplan Sagip as a response to the disaster. It has been accepting donations in cash and in kind for the victims of the typhoon. Donations may be sent to the Council for Health and Development at #35 Examiner St. West Triangle, Quezon City with tel. nos. 929-81-09. Monetary donations may be deposited to the following accounts: Philippine National Bank Savings Account # 219-8303219 and Bank of Philippine Islands US $ account # 314 00 5391 with the swift code BPIPHMM. The group issues receipts when needed.

Meanwhile, Bayan Muna has canceled its anniversary celebration this Wednesday to give way to relief operations in Marikina on Sep. 30 and Montalban, Rizal on Oct. 1. They accept donations at their office located 45 K-7th St., Brgy. Kamias, Quezon City.

According to various data gathered by the CDRC, the number of families affected by Ondoy increased to 89,116 families or 448,454 persons.