You Are Here: Home → 2009 → October → 19 → Change in Control of Food Production Key to Solving World Hunger

In June this year, the number of hungry people throughout the globe reached 1 billion, or a sixth of the world’s population, according to the FAO. This was a considerable leap from 963 million a year ago.

This was the observation made by two peasant leaders interviewed by Bulatlat on the occasion of the international community’s observation of World Food Day (dubbed by cause-oriented peasant groups as “World Foodless Day”) this year.

World Food Day is observed on Oct. 16 yearly. It was established in 1979 by the member-countries of the Food and Agriculture Organization (FAO) of the United Nations, or UN, in 1979 during the organization’s 20th general conference, and was first observed in 1981.

In June this year, the number of hungry people throughout the globe reached 1 billion, or a sixth of the world’s population, according to the FAO. This was a considerable leap from 963 million a year ago.

Of the world’s regions, Asia and the Pacific, which is also the most populous, has the highest number of hungry people, with 642 million. This is followed by Sub-Saharan Africa, with 265 million. 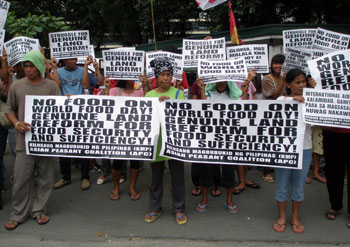 Farmers and peasants demanding land reform, which they say is the only way to ensure food security. (Photo courtesy of KMP / bulatlat.com)

The FAO’s data further show that 70 percent of the world’s hungry people live and work on small-scale farms and rural areas.

“In the fight against hunger the focus should be on increasing food production,” FAO Director-General Jacques Diouf said in an interview over Associated Press Television News. “It’s common sense…that agriculture would be given the priority, but the opposite has happened.”

Diouf attributes the long-term trend toward increasing hunger to a decrease in aid and private investments earmarked for agriculture in recent years. In 1980, 70 percent of aid from donor countries was allocated for agriculture. Twenty-six years later, agriculture’s share was down to only 3.8 percent and improved only slightly in the last three years.

This, according to FAO economist David Dawe, may have been due to low food prices, which discouraged investment in agriculture, as well as competition for funds from other aid fields including debt reduction, emergency relief, and population control.

But Danilo Ramos, secretary-general of the Kilusang Magbubukid ng Pilipinas (KMP or Peasant Movement of the Philippines); and Erpan Faryadi of the Alliance of Agrarian Reform (Agra) of Indonesia) disagree.

According to Ramos, hunger cannot be wiped out as long as multinational and transnational agribusiness corporations and big landlords control seeds and land. The solution to world hunger, he said, is for farmers to gain control of these.

“Seeds, land, and food are interconnected,” said Ramos. “Whoever controls seeds and land can control food.”

“The problem is in the control of production, as well as distribution, of food,” said Faryadi. “The control of these by the hands of a few creates world hunger.”

The likes of Ramos and Faryadi have been putting forward such views for decades. In 2008, the International Assessment of Agricultural Knowledge, Science and Technology for Development (IAASTD) released a report appearing to affirm their views. Reported the IAASTD:

“Worsening income inequality is a serious concern and poses a significant challenge for agricultural and food systems and AKST (agricultural knowledge, science and technology) in all the five regions. The uneven distribution of productive natural resources coupled with the lack of access to resources and fair markets for small-scale producers and women in agriculture, results in extreme inequality and increasing poverty. While peasants and women cultivators are uncommon in (North America and Europe), millions of poor people and women in much of (Central and West Asia and North Africa, East and South Asia and the Pacific, Latin America and the Caribbean, and Sub-Saharan Africa) contend with unequal production and market relationships on a daily basis. Current inequality is exacerbated by the fact that NAE dominates agricultural and rural development resources as well as formal knowledge generation in AKST. For example, businesses within NAE have a powerful impact on global consumer demand; they obtain and profit, directly or indirectly, from commodities, landraces and other valuable genetic resources (stored ex situ in other countries), beneficial organisms for biocontrol programs, immigrant labor and have legal and institutional capacities such as intellectual property rights, standards and market regulations, which many countries in the developing regions lack.

“Landless agricultural labor is at the receiving end of inequitable distribution of productive resources, production practices and technologies. There is increasing rural to urban male migration in search of employment in all developing countries. Social security nets and the provision of non-farm rural or urban employment opportunities are being attempted by countries along with proactive local employment and income generation programs spearheaded by
the CSOs. However, these programs remain limited in both scale and scope.