Obama’s Profile in Courage, or Cave-In?

“It took a lot of courage on Kennedy’s part to defy the Pentagon, defy the military — and do the right thing,” said Col. Larry Wilkerson, USA (ret.), according to Robert Dreyfuss in his recent Rolling Stone article “The Generals’ Revolt”.

Wilkerson, who was chief of staff at the State Department (2002-2005) and now teaches at George Washington University, was alluding to President John F. Kennedy’s courage in 1962, when he faced down his top generals and refused to bomb Cuba and risk nuclear war.

That was as close as we came to nuclear calamity during the entire Cold War.

Despite the urgency of the threat posed by the Russian military buildup in Cuba (we now know the Russians had already placed nuclear weapons on the island), Kennedy’s deliberate decision-making style allowed enough time for cooler heads to prevail and yielded a peaceful solution. 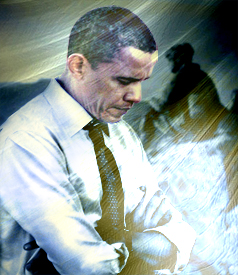 A hallmark trait of John Kennedy was his ability to listen and learn. At the same time, he did not hesitate to challenge conventional wisdom.

Call that “dithering,” if you wish. I, for one, applaud President Barack Obama for following Kennedy’s calm, deliberative style, as Obama faces similar pressure from the military to send tens of thousands more troops to Afghanistan.

Kennedy: Out of Vietnam

The Cuban crisis was not the only time JFK found himself at loggerheads with generals who thought they knew better and who verged on the insubordinate. Kennedy’s sustained arm wrestling with his senior generals over whether to send more troops to Vietnam was just as tense, and much more sustained.

In the end, he concluded that they had it wrong and decided against them. In short, he opted to behave like a President — a “decider” (pardon the odd word). His overruling of the U.S. military brass on Vietnam had huge implications, both short- and long-term. This “real history” is highly relevant today.

The 46th anniversary of John Kennedy’s assassination passed by last Sunday virtually unnoticed. The unfortunate thing is this: his legacy on Vietnam is so widely misunderstood that it is easy to miss the relevance of his decision-making in the early Sixties to the dilemma faced by President Obama today as he decides whether to stand up to – or cave in to – the Pentagon’s plans for escalating another misbegotten war in Afghanistan.

Faux history has it that President Lyndon Baines Johnson’s infusion of hundreds of thousands, up to 536,000, combat troops into Vietnam was a straight-line continuation of a buildup started by his slain predecessor. Kennedy did raise the U.S. troop level there from about 1,000 to 16,500 “advisers” — a significant increase.

But as he studied the options, cost and likely outcomes, Kennedy came to see U.S. intervention in Vietnam as a fool’s errand. Few Americans are aware that, just before he was assassinated, Kennedy had decided to pull all troops out of Vietnam by 1965.

The Pentagon was hell bent on thwarting such plans, and Defense Secretary Robert McNamara found it an uphill struggle to enforce the President’s will on the top brass. Senior military officers were experts at “slow-rolling” politicians who favored a course that the Pentagon didn’t like.

When in May 1962 Kennedy ordered up a contingency troop-withdrawal plan, it took more than a year for the military brass to draw one up.

As the President encountered continuing resistance, he paid increasing attention to more level-headed military and civilian advisers as well as to his own intuition and instincts. Kennedy asked the Marine Commandant, Gen. David M. Shoup, “to look over the ground in Southeast Asia and counsel him.” Shoup told the President:

“Unless we are prepared to use a million men in a major drive, we should pull out before the war expands beyond control.”

Kennedy concluded that there was no responsible course other than to press for a phased withdrawal regardless of the opposition from his senior national security advisers. He decided to pull 1,000 troops out of Vietnam by the end of 1963 and the rest by 1965.