Mangudadatu: ‘Ampatuans Made Business Out of Elections’ 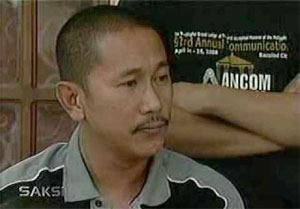 MANILA — While the cries for justice for the victims of the Ampatuan massacre have been amplified many times over — by the media, human-rights advocates, progressive groups, the general public and the international community -– there is one person whose voice should ring louder. Esmael “Toto” Mangudadatu, vice mayor of Buluan, Maguindanao, and candidate for the province’s gubernatorial seat, lost a wife, two sisters, and several other relatives and friends — including at least 30 journalists, one of whom, he said, “was like more than a brother” to him.

His wife Genalyn was leading a convoy to the Commission on Elections (Comelec) office in Shariff Aguak to file his certificate of candidacy. The convoy was waylaid in broad daylight by some 100 armed men led by Datu Unsay Mayor Andal Ampatuan Jr. Several bodies of those in the convoy, as well as those of motorists who were just passing by, were discovered later that day, and more remains were unearthed in the next few days. The dead included some 30 journalists and two lawyers.

Reached by phone in his hometown, Mangudadatu sounded very much composed, but he expressed his desire for justice in no uncertain terms. While placing his trust in the government and the authorities, he also expressed hope that “there will be no whitewash” in the case.

Beyond the Ampatuan Massacre, the interview touches on the prospects that he sees for Maguindanao, as well as what he claims to know about how the Ampatuans wielded power over their province.

Below is the full text of the interview:

How optimistic are you that you will get justice for what happened in Ampatuan?

That is what we are aspiring for. We cannot really be sure. There were the declaration of martial law and the warrantless arrests, but we know that they have many lawyers. But I trust the government and other authorities and I hope there will be no whitewash in this case so that we can obtain justice for my loved ones, my sisters, relatives, and my friends in the media.

Do you think the arrests of the Ampatuans already signal the end of their rule over Maguindanao?

Is it true that your family supported the Ampatuans in previous elections?

Though we were allies before, when Ampatuan Sr. was still our governor, I never supported them. My siblings all know that, they know who I am, and how vehemently I had opposed the Ampatuans’ wishes. I always advised the leaders in our province not to let themselves be swayed by the Ampatuans, because they were only employing deceit to gain more and more power. They made business out of the votes. They extorted money out of the senatorial candidates who were campaigning in Maguindanao by selling votes to them.

What prospects do you now see for Maguindanao, in terms of politics and governance?

If we win in the May 2010 elections, we will carry out a program of reform — total reform for our province. First, the lands that the Ampatuans grabbed from the people of our province, if possible, will be returned to them. Second, reform in education, because one of the main causes of disquiet in our province is the lack of education; about 95 percent of Maguindanaoans do not complete college. Those are our big problems here, and if these are remedied, we can lessen by up to 70 percent – if not eliminate – the poverty and disquiet here in Maguindanao.

How optimistic are you about winning in the elections, given that for a long time the military supported the Ampatuans?

We are trying our best to win in the elections, and with the help of our friends from media, the people of our province, plus the help of the authorities, I hope we can have peace; and we need elections, not selection. The one who selects during elections, Andal Ampatuan Sr., is out of the way and is now in custody, and we hope there will be real elections in our province.