MANILA — The 43 health workers who were arrested Saturday morning in Morong, Rizal province have been subjected to physical and psychological torture, colleagues said.

After three days, relatives and colleagues were finally able to visit the 43 detainees in Camp Capinpin, in Tanay, Rizal, through the intervention of Commission on Human Rights (CHR) chairperson Leila de Lima, who earlier denounced the military for refusing access to those detained.

The military and the police arrested the 43 health workers, including doctors, nurses and midwives on Saturday morning. Colleagues and relatives said the 43 were holding a health training and seminar but the military insisted that they were NPA members and were caught in the act of making explosives. On Tuesday, the military announced that several of those arrested had pending cases in courts and that at least one of them allegedly took part in a failed plot to assassinated then general and now congressman Jovito Palparan. 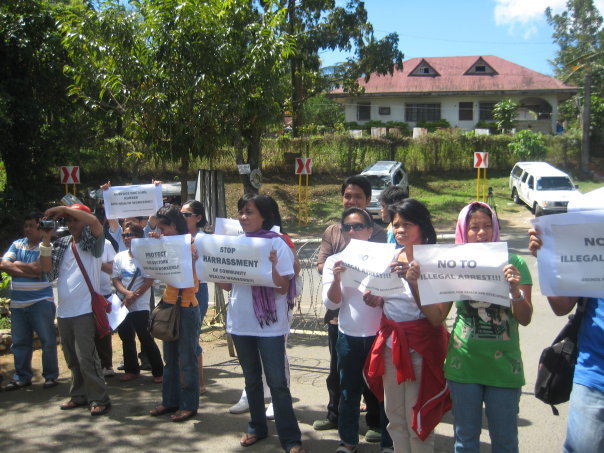 Supporters and relatives of the “Morong 43” rally in front of Camp Capinpin on Sunday. (Photo courtesy of PCPR)

Some of the relatives were not able to see their loved ones, though. “The security was tight. Upon entry, we were subjected to body search twice. The soldiers also took photographs and videos of us,” said Roneo Clamor, deputy secretary-general of Karapatan and husband of Merry, a medical doctor who was among those detained. Clamor told Bulatlat that the health workers were arrested “at gun point, they were blindfolded, handcuffed and made to kneel down.”

In fact, the detainees were blindfolded for 36 hours, said Dr. Geneve Rivera, secretary-general of the Health Alliance for Democracy (Head). “Their blindfolds were only removed at 8 a.m. today, before CHR Chair de Lima was allowed entry to the camp,” Clamor said on Monday.

Clamor said de Lima talked to the military officers and stayed at the camp for more than three hours. “She made sure that we would be allowed to see our loved ones.”

In the Facebook page “Release Thehealthworkers,” de Lima is quoted as saying: “They are continuously handcuffed and blindfolded… they are not allowed to sleep, somebody else feeds food into their mouths, even when they urinate — somebody else pulls down their underwear.”

On Sunday, the CHR-National Capital Region (NCR) team was prevented from entering the camp. They waited at Camp Capinpin from 11 a.m. until the afternoon, to no avail. Lieutenant Colonel Noel Detoyato, civil-military operations chief of the brigade, defended the refusal to allow entry, saying it was caused by concerns over a possible “jailbreak.”

Bulatlat tried to reach de Lima on her mobile phone but got no answer.

Clamor said all of the detainees were subjected to relentless interrogation and were deprived of sleep. “They were made to sit the whole time,” he said. “They [interrogators] played good cop and bad cop. They asked all the personal details and some tried to force the detainees to admit that they are NPA [New People’s Army] members.” On Monday, military officials said some of those arrested had confessed to being communist guerrillas and that they were willing to testify in court against the others.

Clamor said Dr. Alex Montes of the Community Medicine Development Foundation (Commed) was forced to admit that he is an NPA guerrilla. The NPA is the armed wing of the Communist Party of the Philippines that has been waging a Maoist revolution for more than four decades.

Rivera told Bulatlat that the detainees are heavily guarded, with a military officer — a lieutenant colonel as the lowest ranking officer — assigned to each of them. “They are being guarded even to the comfort rooms,” Rivera said. The 43 have been separated in different detention cells, added Rivera.

At 9:15 pm last night, the arrested health workers were subjected to inquest proceedings by a certain Romeo Samson of the Department of Justice (DOJ), according to Clamor. “Again, no counsel for the victims was present during the proceedings.”

“The military said they will file charges of illegal possession of firearms and explosives. They issued a defective warrant and planted evidence against the health workers,” said Clamor.

Lawyer Julius Garcia Matibag, one of the legal counsels, pointed out the illegality and unconstitutionality of the warrant. During the raid, the owner of the farmhouse, Dr. Melecia Velmonte, protested the illegal search and arrests; she was ignored. Upon the intervention of Velmonte’s son, the soldiers presented a search warrant against a certain Mario Condes. “Condes is neither a resident of the house nor known to the Velmontes and to the participants of the training,” Matibag said.