Alex Montes: A Doctor to the People, Hurt and Broken

Inside the camp, Dr. Montes and the others were held in solitary confinement and they were blindfolded for at least 36 hours. He spoke of the indignity of having a soldier pull down his pants whenever he wanted to urinate.

He spoke of how he was interrogated and how the interrogators made him believe he was going to die if he did not admit to being a communist guerrilla.

When Atty. Capulong asked him how the ordeal has affected him, the quiet man could no longer utter a single word. He returned to his seat, seemingly broken.

“We presented evidence to prove the detainees were tortured, denied counsel, held incomunicado, among other human-rights violations” perpetrated on them, Atty. Capulong told Bulatlat after the hearing. “The right to due process of the 43 health workers were violated.”

The hearing lasted more than two hours. Outside the Court of Appeals, supporters and relatives of the 43 health workers who were not allowed near the court held a rally while policemen wielding truncheons held them at bay. At first the media were also barred from entering the court, but they badgered the military and the guards at the gate until they were allowed in, minus their cameras.

At stake at the hearing is the freedom of the 43 health workers and a judgment over whether their arrest and detention by the military were lawful or not. 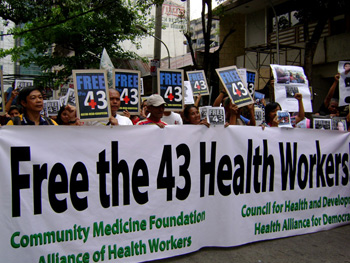 Friends and colleagues demand the release of the Morong 43. (Photo by Janess Ann J. Ellao / bulatlat.com)

The military wanted the court to terminate the proceedings, arguing that the writ of habeas corpus is essentially just a writ of inquiry which should have been answered already when they produced the 43 health workers or alleged NPA members. The military also reasoned that the CA is not the venue to inquire into the search warrant they had used to raid the house of Dr. Velmonte.

(The search warrant stated the house to be searched is owned by a certain Mr. Condes and it did not have the specific address of Dr. Velmonte’s property. Watch Bulatlat’s webcast interview with one of the 43’s lawyers, Atty. Julius Garcia Matibag, for more information about the search warrant used, how the search and arrest were conducted and how the raiders violated several procedures that made the search and arrest not just defective but illegal. )

On the other hand, Atty. Capulong argued that the CA has jurisdiction not only over the habeas corpus proceedings but also to ascertain whether the arrest was lawful or not. They cited previous cases where it had been decided that the court hearing the petition for writ of habeas corpus must also inquire into every aspect of detention.

In the end, the CA allowed the limited presentation of the witness — Dr. Montes — for the 43 health workers. But it will only decide on the petition for the writ of habeas corpus once the two parties — the Office of the Solicitor General, which serves as counsel for the military, and the lawyers for 43 health workers — have submitted their respective “memoranda of authorities” further fleshing out their arguments. The deadline for this is on Wednesday.

“It is hard to say how the court will decide,” Atty. Capulong told Bulatlat. “We hope the 43 health workers will be set free.”

The CA’s decision, whatever it is, would set a precedent, said Atty. Matibag, one of the counsels. In an interview with Bulatlat on Tuesday, he said that the decision could settle the issue on whether a habeas corpus petition becomes moot and academic once a criminal case has been filed against the subject of the petition, in this case the 43.

If the CA decides in favor of the 43, it would be a repudiation of the manner with which the military carried out the search, arrest and detention of the health workers. And based on the various procedural lapses committed by the raiders, Atty. Matibag said he could not see why the CA would rule in favor of the military.

But if the CA does decide against the 43, Atty. Matibag said, the armed forces will be emboldened, if not justified, by the court in violating the rights of individuals. If that happens, he warned, what happened to the 43 health workers will certainly not be the last. (Bulatlat.com)