MANILA — A 2010 election watchdog group launched yesterday is geared not only to monitor the upcoming elections, but also to rally the public to respond accordingly should the electorate’s will be frustrated.

Kontra Daya 2010, which was launched yesterday morning in Intramuros, Manila, has this early raised several fears about the May elections. These include the possibility of massive fraud and failure of elections.

“Our objective is to have credible and acceptable elections,” said former Lingayen-Dagupan Archbishop Oscar Cruz, one of Kontra Daya’s conveners, in a press conference organized for the launch. “With the number of warnings and complaints we have received and signs (that are making themselves felt), there is every reason to be worried about May 2010.” 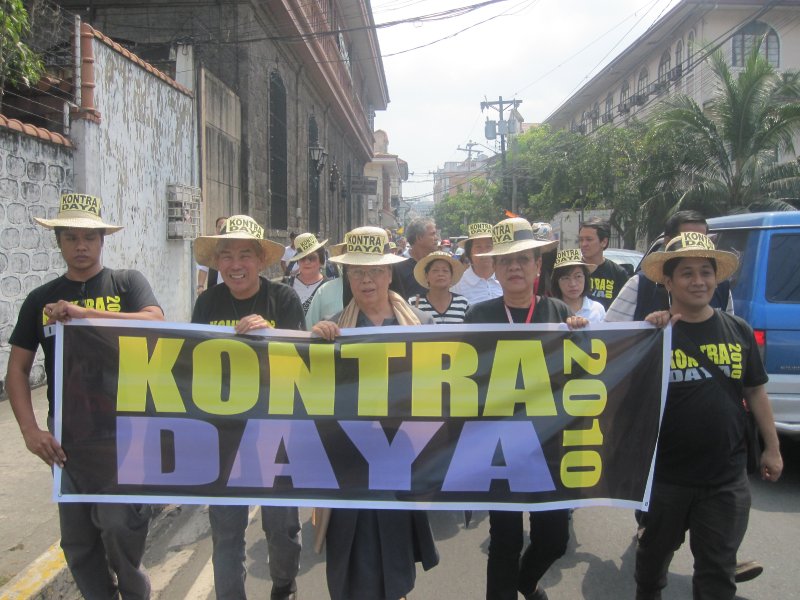 Kontra Daya 2010 convernors and members marching to the Comelec on Wednesday. (Photo from kontradaya.org)

Father Dizon also said that in the event of a worst-case scenario, such as failure of elections or a declaration of martial law – or both – the people should stage civil disobedience. Mo. Mary John Mananzan of the Association of Major Religious Superiors of the Philippines (AMRSP), another convener, expressed a similar view.

Another convener, screenwriter and actress Bibeth Orteza who is also a spokesperson of the Pagbabago! People’s Movement for Change, said she is not even sure whether elections would push through.

“With the Ampatuan Massacre and the arrest and detention of 43 health workers in Morong, we need only one big (thing) to happen in the Visayas to complete the justification for declaring martial law,” she said. “The government is establishing an atmosphere among all the people.”

“The signs are clear that Gloria Macapagal-Arroyo wants to remain in power beyond 2010,” Father Dizon also said.

“With the long history of fraud and manipulation involving the Comelec and other government agencies to favor the incumbent regime, the concerns about the automated elections are serious and require action,” said Bagong Alyansang Makabayan (Bayan or New Patriotic Alliance) secretary-general Renato Reyes Jr., another convener. “We have to be ready to mobilize in huge numbers, should there be a failure of elections. We cannot let Mrs. Arroyo take advantage of that situation to perpetuate herself in power.”

Arroyo acceded to the presidency in 2001 following the ouster of then-President Joseph Estrada through a people-power uprising. She ran in the 2004 presidential elections, and won over her closest rival, the late actor Fernando Poe Jr., amid allegations of massive fraud and violence.

The outgoing president is currently seeking a seat as the representative of Pampanga’s second district at the House of Representatives. Critics believe this is part of a plot to install Arroyo as House Speaker, to be followed by charter-change moves to effect a shift in the form of government from presidential to parliamentary, and declaring her as prime minister. This would enable her to hold power beyond June 30, when her term is due to end.

Another convener, Poe’s daughter Grace Poe-Llamanzares, said the people need to be vigilant in order to ensure that her father’s experience in 2004 will not be repeated.

In the controversial “Hello Garci” recordings, a woman with a voice similar to Arroyo’s is heard instructing an election official – whose voice sounds like that of former Election Commissioner Virgilio Garcillano – to rig the 2004 presidential polls and secure for her a victory of “more than 1M” over Poe. Arroyo went on to trounce Poe by more than a million votes.

Other conveners who attended were Dr. Giovanni Tapang, who chairs the scientists’ group Agham and teaches physics at the University of the Philippines (UP); Henri Kahn of the Concerned Citizens Movement (CCM); Ferdinand Gaite of the Confederation for the Unity, Recognition and Advancement of Government Employees (Courage); Alfred Pascual of the Automated Election System (AES) Watch; screenwriter and actress Bibeth Orteza, spokesperson of the Pagbabago! People’s Movement for Change; and Alvin Peters of the National Union of Students of the Philippines (NUSP).