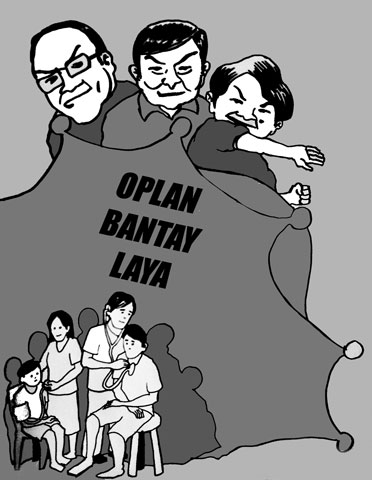 The Arroyo government’s counterinsurgency program Oplan Bantay Laya has been targeting a broad segment of society: from leaders of people’s organizations, to human rights advocates, pastors and priests, lawyers, and now health workers. Prominent human rights lawyer Romeo Capulong called the AFP’s patently illegal arrest, torture, and detention of 43 health workers as de-facto martial rule. Rightly so, with the prevailing impunity in the commission of human rights violations, and the Arroyo government’s desperate efforts to defeat the Communist Party of the Philippines-New People’s Army- National Democratic Front of the Philippines (CPP-NPA-NDFP) by June 2010, the AFP would target just about anybody affiliated with progressive organizations that are closely-linked with and are servicing people’s organizations and communities.