MANILA — After 18 years of working as nurse at the Jose Reyes Memorial Medical Center (JRMMC), a public hospital in Manila, Gary Liberal, 43, is now head nurse at its operating room. With his experience and good record, as the JRMMC itself attested to last Feb. 10, he has had ample opportunities to work abroad and earn a bigger salary. But he chose not to take any of them.

“For Gary, the need to serve his fellow Filipinos here has prevailed,” Emma Manuel, president of the Alliance of Health Workers (AHW), told Bulatlat.

Gary is also union president of the health workers and employees at JRMMC, as well as auditor of the progressive nationwide Alliance of Health Workers (AHW). His colleagues at the JRMMC and fellow union leaders from other public hospitals praised his honest, capable services as a nurse and his calm, persevering leadership in public health workers’ campaigns.

Apart from being their much-loved colleague, Gary is also a board member of the organization of nurses in operating rooms, said John Paul Gubaton, another nurse from JRMMC and auditor of their employees’ union. 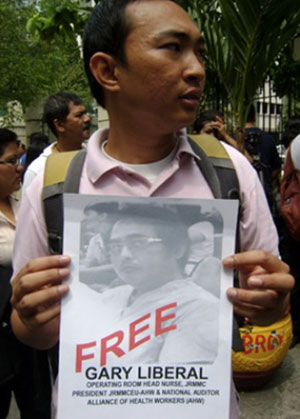 Last Feb. 5, after five days of straight duty, Gary ditched a comfortable Friday night’s rest in his own home to travel for more than three hours to Morong, Rizal, the site of an intensive health training for community health workers sponsored by the Council for Health and Development (CHD) and COMMED. In that training, he had a topic to deliver, called “Basic Life Support.”

Although Gary was scheduled to deliver his topic on Saturday, Feb 6, he requested the sponsors of the training to let him sleep at the venue Friday night so he would not be late the next day.

When he got down and saw soldiers prowling the resort of Dr. Melecia Velmonte that morning of Feb 6, he thought they were just passing by en route to a fiesta. But the military handcuffed him and the rest of the 42 others with him — resource persons like him, participants in the training, the staff and even the driver of the CHD.

Some 300 soldiers herded and brought them blindfolded to what turned out to be Camp Capinpin, a military camp where the 2nd Infantry Division of the army is based. There, they were interrogated, kept handcuffed and blindfolded for 36 hours and held incommunicado for days until furious public reaction forced the military to open their camp for brief periods to relatives of the detainees and to their lawyers.

The nurse who has been working for 18 years at the JRMMC with good service record as attested to by the JRMMC itself suddenly became a member of the New People’s Army (NPA), according to the military. He was there, the military alleged, not to train health workers how to save lives but how to make bombs.

At first, Gary and the 42 other health workers were accused of being members of the NPA’s military commission in training to make explosives. They were later charged with illegal possession of firearms and explosives. When the charges didn’t fly, the military admitted they were health workers, indeed, but still accused them of working under the NPA’s “health bureau,” which the military said is the rebels’ version of the Department of Health.

It has been two weeks now since they were arrested and detained. “This is two weeks that Gary Liberal and the other detained health workers could have spent in service to the health needs of our people,” Manuel said.

“Our Operating Room Head Nurse and Union President Gary Liberal together with others have suffered long enough for two weeks just because they are serving the less fortunate,” said Gubaton, his colleague at JRMMC. Gary is currently on an “indefinite leave” from the JRMMC.