Dr. Merry Mia-Clamor: A Caring Mother, Doctor for the Poor

MANILA — If he can transform himself into his favorite cartoon hero Ben10, Diego Gabriel will save his mother Dr. Merry Mia-Clamor from the “villains” who detained her in Camp Capinpin. 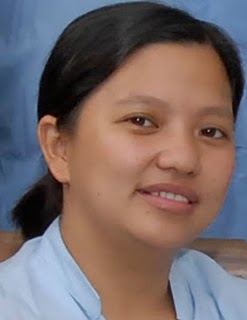 Dr. Merry and the rest of the 43 health workers have been detained at Camp Capinpin for more than two weeks now on the basis of what they call trumped-up charges. Since then, they have been subjected to various kinds of torture — a torture that is also inflicted on their families and friends who spend days and nights thinking what the 43 health workers are going through.

Jigs, Dr. Merry’s husband, would tell friends about Diego’s wish to save his mother. It’s a wish that he himself has had since she was taken.

Jigs had hoped that the family would spend the first birthday of their youngest son Paul Andres, nicknamed Pandoy. During a simple celebration of Paul Andres’ birthday at the office of Karapatan in Quezon City on Feb. 19, Jigs told Bulatlat that their children miss their mother so much. Pandoy’s wish on her first birthday was written on his red balloons: “Free my Nanay. Free the 43.”

Jigs proudly said their eldest son, who they fondly call Egoy, has been tough in this struggle that they are going through. “He would look for (Merry) once in a while but he never cried,” Jigs said. 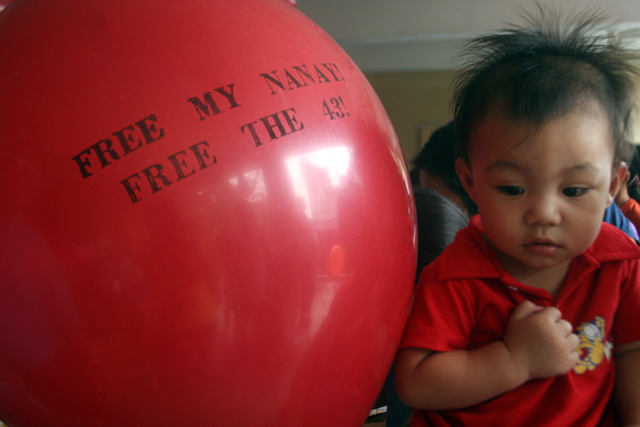 Jigs, Dr. Merry’s husband, with Pandoy, during the child’s birthday party. Printed on the balloon are the words “Free my Nanay. Free the 43.” (Photo by Janess Ann J. Ellao / bulatlat.com)

“Despite Merry’s tight schedule, she always found time to fix our children’s things, from their clothes, to their medicines and their milk,” Jigs said, sharing that his wife’s medical training also made her very keen on the minute details about their children’s health, especially when it comes to their vaccines. When one of the children is sick, “she never sleeps,” Jigs said.

Doctor for the Poor

But aside from being a mother to their children, Merry has become a mother to many poor Filipinos who depend on selfless doctors like her. A consistent honor student, Dr. Merry joined protest actions as member of the League of Filipino Students during her undergraduate years. Later, while she was taking up medicine at the Pamantasan ng Lungsod ng Maynila (PLM), she joined medical missions to urban poor communities. “She always has time for her advocacy as an activist. And she would find the time for it even if if she is very busy,” Jigs said. 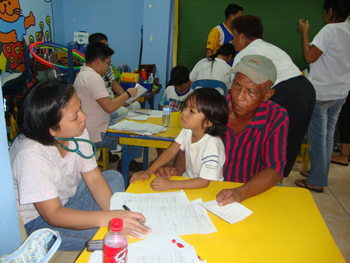 Right after Dr. Merry passed the board examinations in 2002, she immediately plunged into community medicine through the Community Medicine Development Foundation (Commed). “Merry went to remote areas to attend to the health needs of the people there,” Jigs said.

During the latter part of 2003, Dr. Merry practiced medicine at Sta. Monica Hospital in Marikina. She became a member of the Council for Health and Development (CHD) in 2004 and eventually became the director of the Health Education, Training and Services (HETS) Department of the council. Her colleagues at the CHD admire her innate interest to go to different far-flung communities in the country to serve the poor. 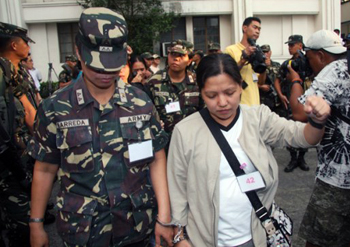 Dr. Merry shackled to a soldier on the way to the Court of Appeals last month. (Photo by Raymund Villanueva / bulatlat.com)

Jigs said one of Dr. Merry’s turning points in life was her trip to Cuba in October 2005 where she joined an exchange program. “She was amazed by how health care was delivered in Cuba,” Jigs said, “She told me that in Cuba there are polyclinics every 200 meters, they have low mortality rates and free health services.”

Jigs added that Merry was also inspired that Cuban doctors chose to stay and serve their own people despite earning only an average of $20 a month. “In Cuba, it is okay to have not much money because most services are given by their government for free,” Jigs said.

“Even if serving as a community doctor entails time away from her loved ones more often compared to a regular clinic-based practice, Merry opted to stay because she knows she can do a lot to help and contribute in empowering the people and improving the state of health,” the CHD said in a statement.

“But what she loved most was training health workers,” Jigs said, adding that Dr. Merry spent many nights preparing for the training in Morong. “I am very supportive of her cause because I know that Dr. Merry wants to help people.” (Bulatlat.com)