MANILA — The relatives of the detained 43 health workers told the media in a press conference on March 1 that their loved ones are still suffering from physical and psychological torture.

“They are being taken out of their detention cells during the early morning to undergo interrogation and are brought back at night or dawn of the next day. They are being forced to admit that they are members of the New People’s Army (NPA). Some of them have big eye bags, indicating that they are being deprived of sleep. Some of them are still in solitary confinement,” said Roneo Clamor, husband of Dr. Merry Mia Clamor.

The relatives are also being given a hard time whenever they visit the detainees, Even doctors who have sent letters beforehand requesting for permission to visit and provide medical services to the detainees are being denied entry by the military. This, according to Clamor, is a clear violation of RA 7438 Section 2 Paragraph F, which provides that “any person arrested or detained or under custodial investigation shall be allowed visits by or conferences with any member of his immediate family, or any medical doctor or priest or religious minister chosen by him or by any member of his immediate family or by his counsel, or by any national non-governmental organization duly accredited by the Commission on Human Rights or by any international non-governmental organization duly accredited by the Office of the President. The person’s ‘immediate family’ shall include his or her spouse, fiance or fiancée, parent or child, brother or sister, grandparent or grandchild, uncle or aunt, nephew or niece, and guardian or ward.”

RA 7438 is an act defining certain rights of person arrested, detained or under custodial investigation as well as the duties of the arresting, detaining and investigating officers, and providing penalties for violations. 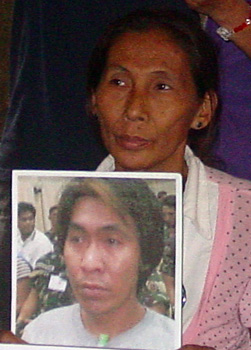 Adoracion Paulino narrates that her son was forced by the military to admit that he is a communist rebel. (Photo by Anne Marxze D. Umil/bulatlat.com)

Some relatives are also being harassed and intimidated by the military. Adoracion Paulino, mother of Valentino Paulino, narrated that his son has been offered by the military the amount of P50,000.00, a job for both of them and a counsel from the AFP if he will surrender and admit that he is a member of the New People’s Army. But Mrs. Paulino told his son not to give in. She also said that the military tried to talk to her during one of her visits to her son.

“There was this one instance while I was at Camp Capinpin for a visit, a soldier in civilian clothes approached me. But people from Karapatan surrounded me to prevent the man from approaching.” She was also advised by Valentino not to come too often because the military might get her to convince her and his son to accept the military’s offer. She also said that their place was often visited by unidentified men in civilian clothes looking at their house so she was forced to transfer. She never goes out alone anymore.

The military also took pictures or videos of them whenever they visit.

Last Sunday, a relative of a detainee requested to have a mass inside the vicinity of the camp. But the military did not permit them even when the priest talked to the military to ask permission. They held the mass outside of the camp instead.

Clamor said they will not stop exposing to the public the continuous violations being committed by the military on the rights of the 43 health workers.

During the same press conference, Karapatan urged the public to be more vigilant as more gross and systematic violations of human rights are being committed by the AFP because the government is now implementing a policy of “undeclared martial law.”

Marie Hilao-Enriquez, chairperson of Karapatan said “this is being shown by the military’s illegal arrest of the 43 health workers.” She also said that the military’s violation of RA 7438, their initial defiance of the Court order to present the victims, keeping the victims “illegally detained” in the military camp where the victims are still being tortured, denial of medical attention and harassment of relatives were only experienced during the martial law days.