You Are Here: Home → 2010 → March → 12 → Group Releases Scathing Report on Violations of Workers’ Rights in Philippines 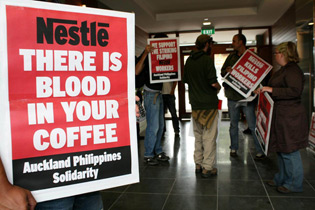 The Center for Trade Union and Human Rights (CTUHR), an NGO that documents and monitors human-rights violations committed against workers, released today a report that says that, in the past 50 years, unemployment in the country is highest in the nine years that President Arroyo is in power. “To date, 95 workers, trade unionists and labor rights activists had been killed extrajudicially, four were abducted and forcibly disappeared, and no one had been prosecuted for these murders,” the center said. Read or download the report, titled “Hunger, Repression and Resistance.”