15 Years After Death of Flor Contemplacion, OFWs Remain Vulnerable as Ever

OFWs and domestic helpers are still going through the same nightmare that Flor Contemplacion suffered. Many rot in jail. Several have been sentenced to death. Thousands suffer abuse from their employers and neglected by their government. To these OFWs, the Arroyo regime is “chief executioner of the rights and welfare of OFWs.”

MANILA — The case of Flor Contemplacion, an overseas Filipino worker (OFW) who worked in Singapore and who was sentenced to die after he was accused of killing a fellow Filipino domestic helper, is still etched in the people’s minds even.

Her death by hanging in Singapore was met by huge protest actions that shook the foundations of the Ramos administration. Contemplacion became a symbol of the hardships and sufferings that befall on OFWs. It should have been a wake-up call for the government. Yet, 15 years since her tragic death, OFWs are still suffering from worsening work conditions, abuse, and government neglect. And the same tragic stories are repeated over and over again. 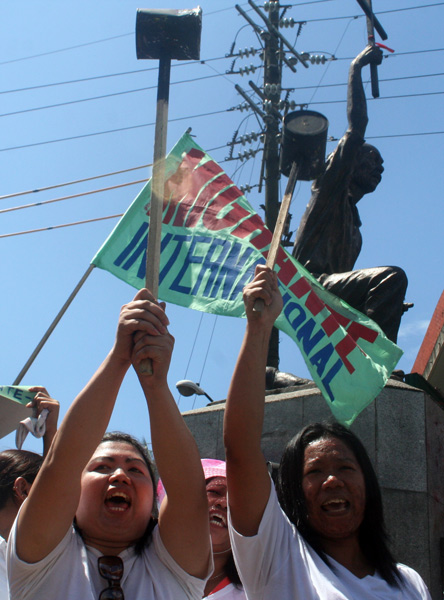 While the hanging of Contemplacion happened during the Ramos administration, Migrante International, the biggest organization of OFWs, still see President Gloria Macapagal-Arroyo as the “chief executioner of the rights and welfare of OFWs.”

Migrante chairman Garry Martinez said in a statement that six OFWs have been beheaded under the Arroyo administration, 26 are in death row in the Middle East alone and hundreds are in jails. Migrante said OFWs who are accused of crimes are eventually convicted because the Arroyo government failed to provide them with legal assistance.

But this year’s commemoration of Contemplacion’s execution is also marked by another death of an OFW. According to news reports, the body of a Filipino woman domestic helper was discovered last Monday March 15 in an apartment in Bencoolen Street, Singapore. The body, which had multiple stab wounds in the chest, was identified as that of Roselyn Pascua.

“We hope that justice will be served in this case and will not add further to the long list of mysterious deaths where the perpetrators have never been identified or punished,” Martinez said.

Some 72 percent of the 144,312 OFWs in Singapore are women, most of them are working as domestic helpers. Since 2008, Migrante has counted 51 cases of mysterious deaths in Singapore. 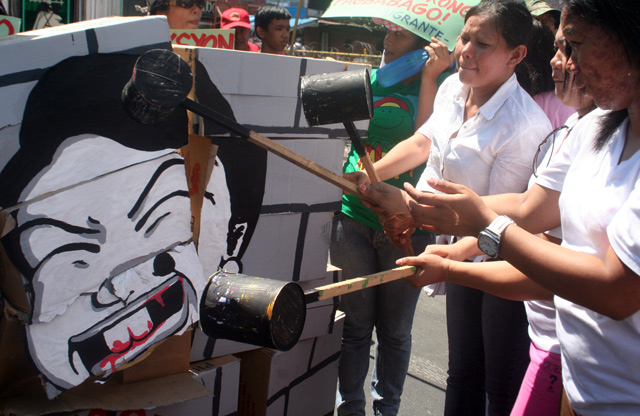 To commemorate the death of Contemplacion and to protest the continuing abuses and government neglect being suffered by OFWs, Migrante, OFWs and their kin marched last Tuesday March 16 from Morayta to Mendiola bridge near Malacanang, The protesters denounced the worsening plight of overseas migrant workers and accused the Arroyo administration of being the “top violator” of the United Nations Convention on the Protection of the Rights of All Migrant Workers and Members of their Families.

Another Story of Abuse

Heidi Simpron, 37, also an OFW, knows the story of Contemplacion. But she never expected that after working in the Middle East for so long already, she would come close to suffering the same fate as Contemplacion’s. .

Simpron left for Riyadh on Aug. 22, 2009, to work as a domestic helper. It was not the first time that she would work as a migrant worker. “My recent employer was very nice to me during my first month. But when I reminded them that my salary was already due, things began to change,” she told Bulatlat. A few days later, Simpron was given her first salary, 1,500 riyals. But “I could feel that they were talking about me behind my back but I was not sure then what it was all about.” 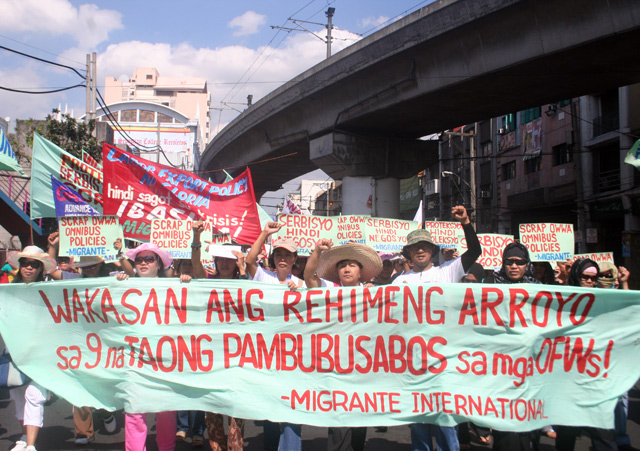 On Oct. 16, 2009, Simpron finally understood what was happening. She was brought to the police station and was accused of robbery. As part of the “procedure,” her employers took off her clothes, despite Simpron’s plea that she had menstruation, purportedly to check if she has really stolen anything from their house. “I was harassed. I felt violated,” she said.