You Are Here: Home → 2010 → March → 29 → Progressives on Warpath Vs Partylist Groups Allied with Arroyos

Progressives on Warpath Vs Partylist Groups Allied with Arroyos

Anakpawis Partylist, KMU, Gabriela, Migrante and Courage — representatives of “truly marginalized groups in the Philipines” — vowed also to spend the Holy Week filing disqualification cases not only against Mikey Arroyo and the rest of the dubiously “marginalized” leaders of AGP (which include incumbent Pampanga officials related to Lilia and Bong Pineda, known Arroyo allies and alleged jueteng operators), but also against the rest of the 30 accredited partylists that are “backed by the Arroyo administration and do not genuinely represent any marginalized sector,” said Kontra Daya member Renato Reyes.

“Mikey Arroyo must know that he is performing a great disservice to members of genuine party-list groups and the marginalized sectors they represent. The least he can do now is to withdraw and not to wait for the Comelec to declare his disqualification — there is no way he can justify being “marginalized” and being the so-called representative of a group of security guards,” Ocampo said.

It is not enough for the candidate to claim representation of the marginalized and underrepresented, because representation is easy to claim and to feign, Ocampo and Maza said in the petition. The partylist organization or party must factually and truly represent the marginalized and underrepresented constituencies mentioned in Section 5 of the Constitution. 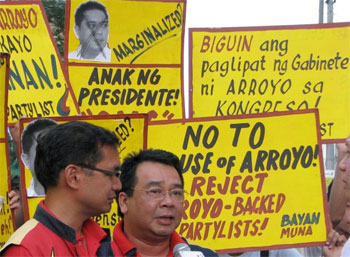 “The intent of the Constitution is clear: to give genuine representation to the people, not only by giving more laws to benefit those who have less in life, but more so by enabling them to become veritable lawmakers themselves. Consistent with this intent, the policy of the implementing law, we repeat, is likewise clear: “to enable Filipino citizens belonging to marginalized and underrepresented sectors, organizations and parties…to become members of the House of Representatives.”

Bayan Muna Representative Teddy Casiño explained why Arroyo should be disqualified. “Representative Mikey Arroyo is in no way a member of, nor does he belong to, any marginalized or underrepresented sector. He is in fact a super-rich and mega-powerful man, being an incumbent congressional district representative, a former vice governor and a son of the President, the most powerful official in the land.”

Casiño added that Mikey is a member of the ruling coalition party Lakas-Kampi-CMD and could not have been a member of AGP for 90 days as required by law. “Mikey is not a security guard, a tricycle driver, nor is he an advocate of such sectors. In fact, he is a multi-millionaire as attested to by his 2008 statement of assets, liabilities, and net worth (SALN) which totaled P99.2 million,” said Casiño.

A day before the deadline of filing of partylist nominees, the Comelec issued on March 25 Resolution No. 8807 or the rules on disqualification cases against nominees of party list groups.

It said that the nominees should truly belong to the marginalized and underrepresented sector/s, the sectoral party, organization, political party or coalition they seek to represent.

Party list groups are required to submit “documentary evidence” including prior declarations, speeches, written articles and other positive actions on the part of the nominee/s showing his/her adherence to the advocacies of the party-list group/organizations. The nominee/s must be both an advocate and a bona fide member of the party list group.

“There is even speculation that the Comelec is afraid to stand up against Mikey Arroyo and the other relatives of incumbent government officials who are trying to infiltrate the party-list system. The Comelec is tasked with upholding clean and credible elections, but why is it allowing the likes of Mikey Arroyo to join the party-list elections? The Comelec cannot wash its hands of the responsibility to right this wrong,” Ocampo said.

“Arroyo and her allies may have succeeded in exploiting the loopholes in the party-list system at this point but we cannot allow these maneuvers to prosper,” Bayan Muna Rep. Neri Javier Colmenares said in a separate statement, adding that they too would file a disqualification case against Mikey.

“Root out the Arroyo Tree, An Evil Tree”

Colmenares deemed Mikey’s move as “part of orchestrated efforts to support his own mother’s plans to become Speaker of the House and to amend the 1987 Constitution. This is all a self-serving ambition at work at the expense of the party-list system.”