You Are Here: Home → 2010 → April → 1 → Lack of Voters’ Education for AES in HK, Singapore, Means Disenfranchisement to OFWs

Lack of Voters’ Education for AES in HK, Singapore, Means Disenfranchisement to OFWs

With only a couple of weeks left before the start of the automated overseas absentee voting for Filipino workers in Hongkong and Singapore, voters still have no idea how it would proceed. They were informed that they would just be oriented and assisted on the day itself.

The overseas absentee voting would be held from April 10 until May 10, 2010. It will be held in Philippine embassies worldwide to give the growing population of OFWs an opportunity to vote.

Commissioner James Jimenez of the Commission on Elections (Comelec) said educating voters on the automated election system (AES) on election day itself would be enough. He added that posting a list of steps and reminders for voters would already ensure a hundred percent success rate for the elections.

“We could have decided to distribute (leaflets), but we fear that they might just throw it away,” Jimenez told Bulatlat. Aside from the posted reminders on voters’ desks, they would also be hanging two large tarpaulins containing the steps and reminders inside the room where the voting would be held. “So when they look up in every direction, they would be able to see it.”

However, when the Gabriela chapter in Hongkong conducted a voters’ education campaign, they received feedback that OFWs are anxious regarding the voting procedures. OFWs wanted to make sure that their ballots would not be spoiled. 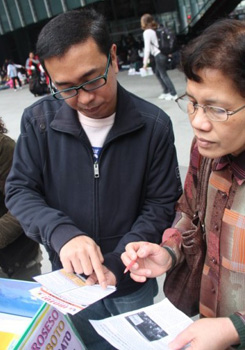 “We hope to familiarize them to the size of the ballot and how to properly shade their candidates of choice,” Cynthia Tellez said in a statement, adding that it took a couple of tries before OFWs could sufficiently and properly shade the ovals especially for those with eyesight problems.

Tellez said their group fears that OFWs are again facing disenfranchisement, saying that there is a high possibility that OFWs who will not be reached by their voters’ education efforts would commit mistakes and have invalid ballots.

“Commissioner Armando Velasco’s overconfidence that the AES will be a simple process and will proceed without a hitch actually scares us,” Tellez said. Velasco was the Comelec representative who came early March to orient OFW leaders regarding the AES.

“The one month election period allotted for us (OFWs) translates to only four days because OFWs could only go out and vote during their day off. How can Comelec expect to educate more than 90,000 registered voters in Hongkong?” she said, adding that the Comelec is always late or worse, downright neglectful when it comes to OFWs and the OAV.

Of the 82,000 Precinct Count Optical Scan machines, only 76,000 would be used for the elections in the Philippines. Jimenez said that with the 6,000 spare PCOS, Comelec thought that it is high time to introduce the new technology overseas. “To a certain extent we also want overseas voting to move forward. We want to improve the technology we use overseas,” he said, citing that the Philippines was the first country in Asia to hold voting via internet during the 2007 elections.

“This (automation) is just a continuation of the efforts of Comelec to modernize,” Jimenez said.

Jimenez said Comelec is working on a massive roll out theory, comparing the AES to Mini Stop, a 24-hour convenience store in the Philippines. The massive roll out theory as applied by the local convenience store, Jimenez said, translates into the opening of many Mini Stop stores in an area. Eventually, the store that does not gain profits is shut down.