The letter branded Ocampo as a “butcher and murderer” in the Southern Tagalog and Bicol regions for allegedly leading the “Operation Missing Link”, the supposed purge of the Communist Party of the Philippines (CPP) against suspected military agents inside the movement. The letter also accused Maza of ordering the killing of Akbayan members and coordinators in Nueva Ecija.

Makabayan-Ilocos Norte coordinator Ramon Plaza said that one of such letter even had a black ribbon attached to it.

Maza and Ocampo attended several activities in Ilocos Norte last December 2009 before both of them headed to Vigan, Ilocos Sur to be guest speakers at the National Convention of the National Union of Students of the Philippines (NUSP).

The letter also maligned party list groups Bayan Muna, Anakpawis, Gabriela, Kabataan, Katribu, ACT Teachers and Akap-Bata as front organizations of the CPP for the upcoming 2010 elections with the alleged aim to “infiltrate the democratic institution and ruin it from the inside.” 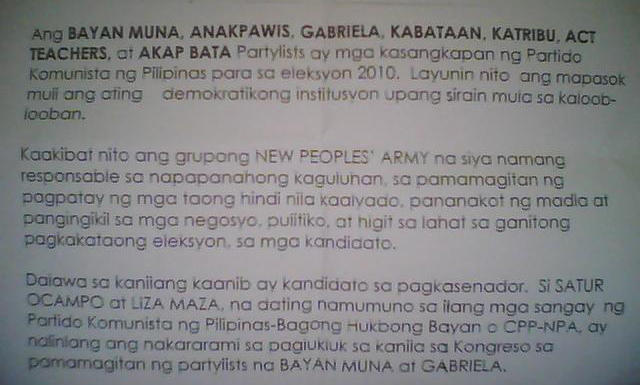 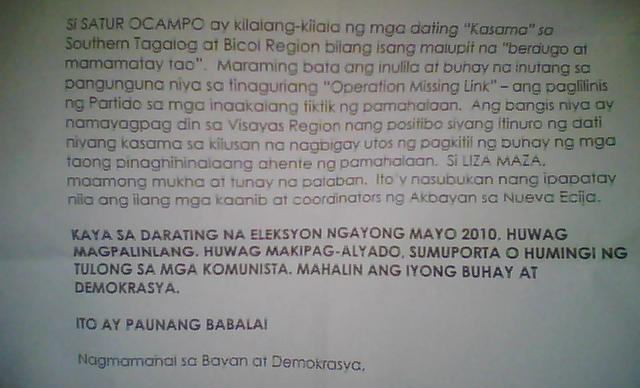 “The letter is a desperate attempt to ruin the credibility of the candidates and to deprive the masses of leaders that will truly serve their interests,” Plaza said.

Makabayan-Ilocos suspected that the letter came from the Northern Luzon Command of the Philippine Army as it was written in Tagalog and cited different provinces in Luzon.

Plaza further explained that the red-baiting against Ocampo, Maza and the progressive party-lists is being used as an excuse in harassing, abducting and killing its supporters and members. He said it is part of the Arroyo government’s plan to finish the communist insurgency by 2010 through Oplan Bantay Laya 2.

“The track record of Bayan Muna, Anakpawis, Gabriela and Kabataan show that these groups have worked for the interests of the people by passing laws, bills and resolutions that benefit the marginalized sectors in society,” Plaza said.

These laws include the Anti-Trafficking in Persons Act, Anti-Violence Against Women Act, Philippine Nursing Act and the Senior Citizens Act. Both Ocampo and Maza were co-authors of the said laws. The party-lists Katribu, ACT Teachers and Akap-Bata were also included in the poison letter because of their pro-people programs, said Plaza. (Bulatlat.com)