MANILA – Less than a month before the elections, more than 70 Hacienda Luisita farmers and students from the University of the Philippines (UP) stormed presidential candidate Benigno “Noynoy” Aquino III’s house on April 14, demanding justice for the “martyrs” of the 2004 Hacienda Luisita massacre.

Carrying a makeshift black coffin and “bloodstained” yellow ribbons, the protesters marched along Times Street, where houses bear yellow banderitas and cars with yellow ribbon stickers. Later they proceeded to the Department of Agrarian Reform to hold a program.

“The decades of exploitation and continued reign of the Cojuango-Aquino family inside the hacienda are already too long, and will continue for another six years if Noynoy is proclaimed president,” read the April 14 joint statement of the United Luisita Workers’ Union (ULWU) and the Kabataan Partylist-UP Diliman, which organized the protest action with Katipunan ng mga Sangguniang Mag-aaral sa UP (Kasama sa UP), Alyansa ng mga Manggagawang Bukid sa Luisita and MARTYR, an organization of farmers and victims of the Hacienda Luisita massacre.

Hacienda Luisita, a 6,419-hectare property of the Cojuangco family, is composed of 10 barangays and the Central Azucarera de Tarlac (CAT), the second largest sugar mill in the country. On Nov. 16, 2004, seven striking farm workers were killed and more than a hundred wounded in a violent dispersal in front of the hacienda gate.

Hacienda Luisita was supposedly subjected to land reform in 1989 under Cojuangco heir President Corazon Cojuangco-Aquino. However, under the Stock Distribution Option (SDO) provided by Aquino’s Comprehensive Agrarian Reform Program (CARP), the farm workers were given stocks instead of actual land parcels. 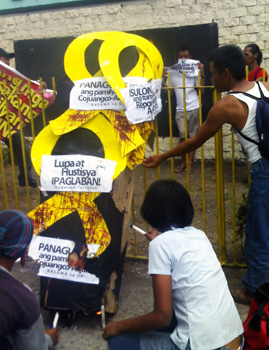 Through CARP, the Cojuangcos declared only 4,915 hectares of the hacienda as subject to land reform and placed it under the corporate name Hacienda Luisita, Inc. (HLI).

“Six years after the massacre, the Cojuangco-Aquino family has still maintained their hold on the thousands of hectares of land that comprise HLI, despite a 1985 order from the Manila Regional Trial Court to distribute the land to the farmers,” and through Aquino’s CARP, a law that further exploited farmers, said ULWU in the statement.

After 16 years of SDO, farm worker beneficiaries have become more impoverished, said UP Student Regent Charisse Bañez during the protest action, adding that Mikee Cojuangco’s horses cost more than a month’s worth of food for the Hacienda Luisita farmers.

The farmers’ take-home pay plunged to as low as P9.50 ($0.21) a week, and at the same time, they were “victimized” by unfair labor practices, said ULWU acting president Lito Bais.

“Where is the service-oriented leadership being promised by Noynoy?  Until the problems of the farmers of Hacienda Luisita are unresolved, we would continue fighting for justice and land reform,” said Bais in Tagalog. 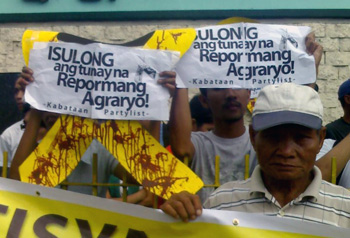 Aquino III, who has continually skirted the issue for months now, cannot “wash his hands clean in the labor and land dispute at the Hacienda Luisita on the basis of his being a minor shareholder,” said Kasama sa UP in an April 14 statement, adding that “such excuse and failure to rein in his family are a display of inutility and lack of leadership.”

Aquino III’s “lack of sincerity” is also evident when he declared last year that the hacienda will be distributed to farm workers by 2014, which is “inconsistent” with the statement of his cousin and HLI chief operating officer Ferdinand Cojuangco to the New York Times, said Rainer Sindayen, chairperson-elect of UP Diliman Student Council. In the February 23 interview with the Times, Cojuangco said the family has no intention of giving up the land or the sugar business.

“How can the youth and the people trust Noynoy Aquino to push for genuine agrarian reform when his family, in connivance with Gloria Macapagal-Arroyo, orchestrated the massacre in 2004, and is continually in support of anti-farmer and anti-people land reform policies such as the [CARP]?” Sindayen said. (Bulatlat.com)