In a press conference this morning, Ocampo and Maza denounced what they called a systematic attack against them and the progressive party-list groups under the Makabayan coalition. These groups are Bayan Muna, Gabriela, Anakpawis, Kabataan, Act Teachers Party and Katribu.

The attacks against them, they said, take on different forms, including poison letters sent to their allies, defacement of campaign materials, written and verbal threats, forums, film showings and public meetings, among others.

Ocampo said that in 2001, 2004 and 2007 elections, the base of votes of progressive party-list groups widened. “The Arroyo government fears the continued growth in membership and political influence of the progressive bloc in Congress,” Ocampo said.

Maza said the Armed Forces of the Philippines (AFP) is behind all these. “Who else has the machinery and resources?” she said.

“The AFP should not engage in partisan politics,” Maza said.

Ocampo said red baiting and other forms of black propaganda are not new. In fact, hundreds of leaders and members of progressive party list groups, including 135 members of Bayan Muna, have been killed and abducted.

Ocampo noted that since April 4, 2001, the Arroyo government has started a campaign of harassments targeting their groups, adding that it was Defense Secretary Norberto Gonzales, then national security chief and head of the Inter-Agency Legal Action Group (IALAG), who branded their party-list groups as front organizations of the Communist Party of the Philippines (CPP).

Ocampo said the Arroyo government is threatened anew with the formation of Makabayan as a major political party and the party’s decision to field in two senatorial candidates. “The Arroyo government, the DND [Department of National Defense], Bert Gonzales fear the swelling ranks of our allies,” he said. 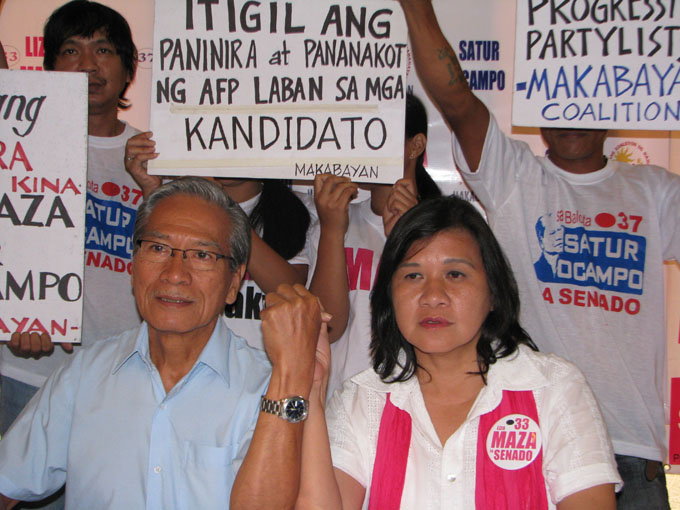 Ocampo told Gonzales, Gen. Jovito Palparan and the Arroyo government to just shut up. Palparan was branded “Butcher” for the high death toll of activists in areas where he was assigned as military commander.

“Bert [Gonzales] should just shut up. Palparan is just like a broken record,” Ocampo said, noting that Gonzales’s allegations were unfounded as the Supreme Court junked the rebellion charges filed against Ocampo, Maza and other party list representatives in 2007.

“Even local candidates are now also targets of harassment,” Maza said, noting that their allies in Luzon, Visayas and Mindanao have received letters from dubious senders threatening them to stop dealing with Makabayan candidates.

Arthur Allad-iw, a candidate running for councilor in Baguio City, received two of such letters. The second one, written in Filipino, reads: “We have proven that you continue to ally with the enemies of democracy, the CPP-NPA.” 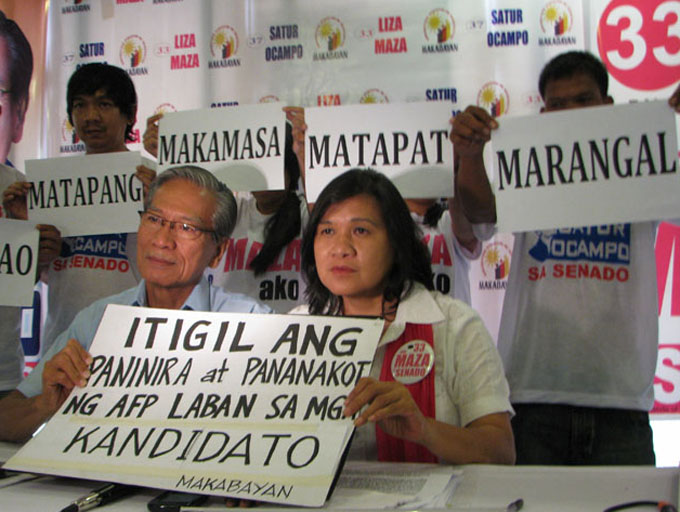 “Amid the heightening support, they wanted to prevent us and the party list groups from winning,” Maza said.

“If anything happens to our allies, we know who should be liable. It is the AFP all the way up to the commander in chief,” Ocampo said.

Ocampo said they would file charges against the perpetrators.

He said that a complaint was already filed against Major Arnaldo Manjares of the 901st Brigade based in Daraga, Albay for grave threat. Manjares confronted two of their members and were told to stop their activities or else they would be killed.

“We are preparing to file parallel complaints in Mindanao,” Ocampo said.

Maza said they also plan to file cases before the Commission on Elections (Comelec) against the AFP.

The AFP, said Ocampo, is suppressing the free discussion of platform for change.

Maza said that the Arroyo government’s actions block the participation of the Left in mainstream politics. (Bulatlat.com)