You Are Here: Home → 2010 → May → 6 → Campus Journalists Endorse Progressive Party-list and Senatoriables

The endorsement resolution was presented to and approved by member student publications from all over the country. Entitled, “A Resolution Reaffirming The Guild’s Support For The Kabataan Partylist And Senatorial Candidates Satur Ocampo And Liza Maza”, it was sponsored by St. Scholastica’s College – The Scholastican and University of the Philippines-Diliman – Philippine Collegian while other student publications including Polytechnic University of the Philippines – The Catalyst, and Eulogio Amang Rodriguez Institute of Science and Technology – Technozette co-sponsored the resolution. 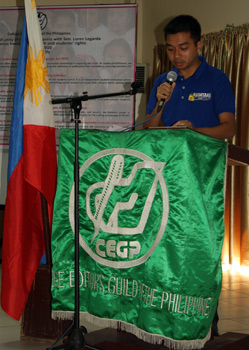 The resolution, according to outgoing CEGP National President Vijae Alquisola, is a reaffirmation of support to Kabataan Party list, Satur Ocampo, and Liza Maza, who have been instrumental in the fight of the youth, particularly young budding journalists.

CEGP, being one of the founding members of Kabataan Party-list, together with National Union of Students of the Philippines (NUSP), Student Christian Movement of the Philippines (SCMP), League of Filipino Students (LFS), Kabataang Artista para sa Tunay na Kalayaan (Karatula), has been very supportive of the party and its advocacies.

“CEGP does not only support Kabataan Party list because they are one of its founding members but more so they (Kabataan Party list) have expressed their intention of upholding press freedom thru amending the Campus Journalism Act of 1991,” Alquisola said.

Kabataan Representative Raymond Palatino vowed to introduce amendments to CJA of 1991 particularly the non-mandatory collection of fees and lack of penalty clauses.

Kabataan Party-list has served one term in the House of Representatives. In those years, the party has sponsored bills like Anti-No Permit, No Exam Policy, BPO Workers’ Welfare and Protection Act of 2009, SK Reform Act of 2009, Public Libraries Bill, Free Special Education Bill, Styrofoam Ban Act, and Philippine Sports and Games Act of 2009.

Bayan Muna Representative Satur Ocampo was a former CEGP member and is a recipient of Marcelo H. Del Pilar Award, the highest recognition given to a former CEGP member. Being a former campus journalist for Lyceum University of the Philippines, CEGP believes Rep. Ocampo knows the struggles and values the importance of a journalist. 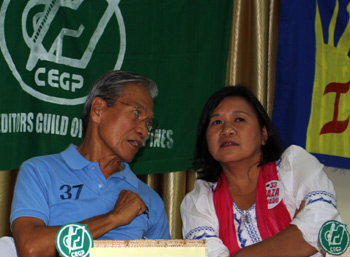 “Ka Satur is a big part of the guild, and we (CEGP) know that he values the vision of the guild as well as of the young journalists,” Alquisola added.

Rep. Ocampo, in his three in the House of Representatives, has sponsored Anti-Torture Law, Rent Control Act of 2009, Tax Relief for Minimum Wage Earners Act of 2008, Public Attorney’s Office Act of 2006, Abolition of Death Penalty, Overseas Absentee Voting Act of 2003, and Philippine Nursing Act of 2002

Gabriela Party Representative Liza Maza was endorsed by CEGP for the reason that she and her party have been very consistent in fighting for the rights not only of women but also of youth and children.

“On Liza Maza’s part, the guild believes in her ability to pursue issues concerning education, women and youth,” Alquisola added.

Rep. Maza, in her three terms in the House of Representatives, has authored bills like Magna Carta of Women, Anti-Violence in Women and Children Act, Juvenile Justice and Welfare Act of 2006, and Anti-Trafficking in Persons Act.

As for the endorsed candidates, they have also shown their support to the organization by taking part in the guild’s latest nationwide convention.

Senatorial candidates Liza Maza and Satur Ocampo visited the guilders and delivered a speech reminding the journalists of their roles in the coming elections. (Bulatlat.com)