MANILA — Although the government claims to do its best in improving health services for the people, the dire working conditions of nurses and doctors and the diminishing health budget speak of a moribund healthcare system. As if this is not enough, the Arroyo administration is even tolerating the harassment of community health workers who only wanted to serve the underprivileged in far flung areas.

Health organizations such as the Health Alliance for Democracy (HEAD) joined other labor groups in the Labor Day rally on May 1, slamming the failure of President Gloria Macapagal-Arroyo’s administration to address the “woes of the health sector.” Worse, under Arroyo’s term, the military has illegally arrested and detained 43 community health workers, dubbed the “Morong 43,” when these practitioners serve the people who do not have access to healthcare, HEAD said in a statement.

“The grossly inadequate budget allotted for health services has forced many health professionals to work abroad, while those who opted to stay are stuck in unfair labor practices and low wages,” said Sean Velchez, HEAD national staff.

This translates to a meager budget of P362 ($8.11) per person for the entire year, not even enough for a month’s supply of basic medication, said Velchez, adding that seven out of 10 ill people die without even seeing a health practitioner. 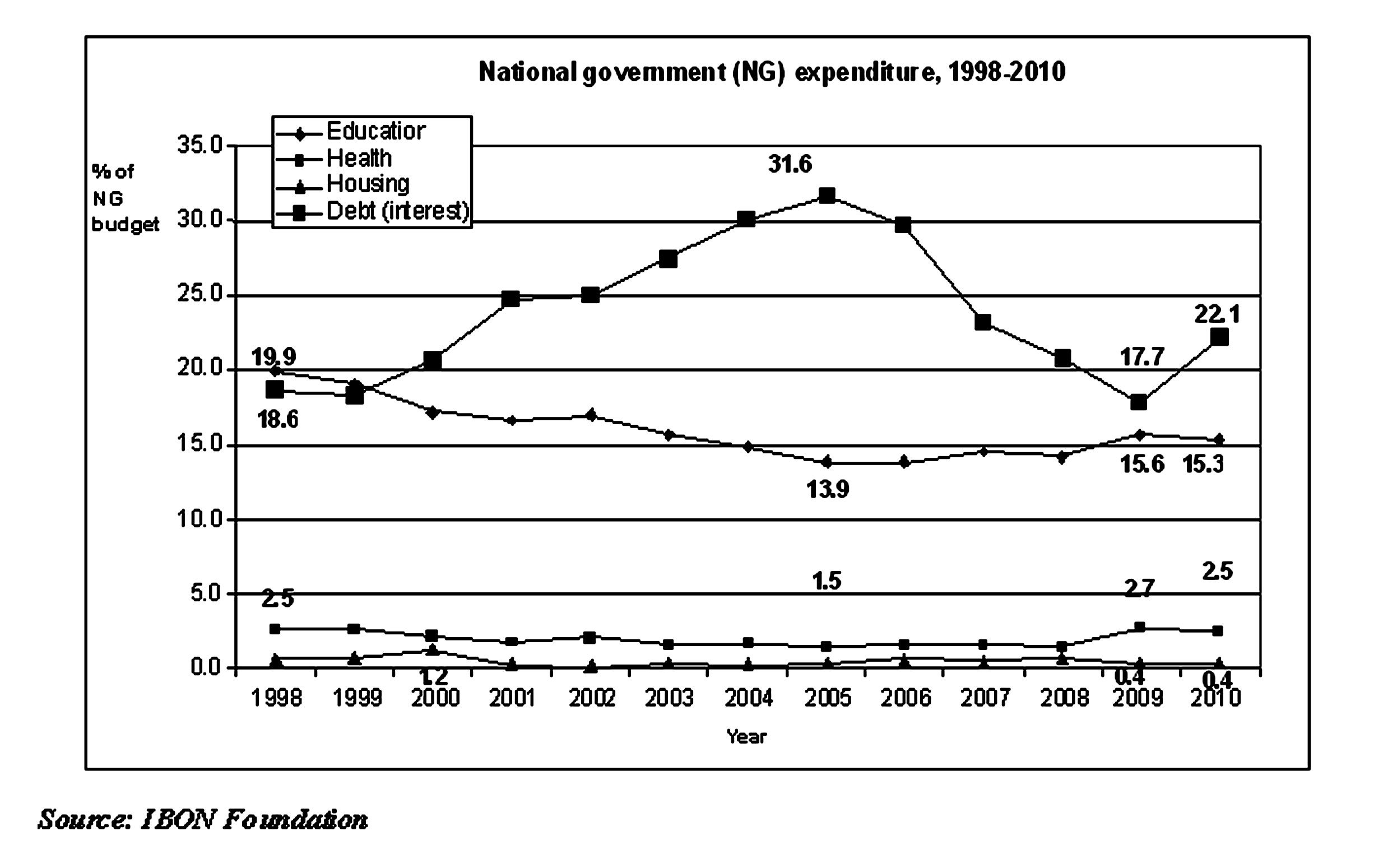 Moreover, in the budget, only P16 million ($358,663) is allocated for indigent patients in all Department of Health hospitals. If P2000 ($44.83) is spent on each patient, only around 8000 patients, or less than 0.01 percent of the population, will benefit from the allocation.

Indeed, “the state of the country’s health sector, along with other social services, has degraded alarmingly under the nine years of Arroyo’s term,” said Sonny Africa, head researcher of independent think-thank IBON Foundation (see chart).

There is nothing in the national budget to keep health workers from pursuing their careers in other countries, especially if they are underpaid and overworked in public hospitals, said Christian Mostrales, a member of HEAD. Coupled with the “export-oriented” system of education in medical schools, these working conditions push health workers to look for greener pastures abroad.

“The Philippines, as part of a larger policy to encourage worker migration, has been training health workers, especially nurses, for export for many years—they constitute 76 percent of foreign nurse graduates in the United States, for example,” according to the World Health Organization 2006 report.

Mostrales said the Arroyo administration depends on the exodus of health practitioners, along with other overseas Filipino workers (OFWs), to keep the economy afloat. Overseas Filipino workers, around 7 percent of whom are doctors and nurses, have sent back US$17.9 billion worth of remittances in 2009, constituting 10.8 percent of the country’s gross domestic product (GDP), according to a report from The Bangko Sentral ng Pilipinas.