MANILA — At the slightest rainfall, the relocation site where Rhiza Perlas, (age), lives is usually flooded. But on one fateful day on September 25, 2009, many homes in Montalban, Rizal were damaged and worse, swept by tropical storm Ondoy. The flood water rose so fast making it almost impossible to bring important things and documents to safety.

“During Ondoy, the water entered our house and reached the roof. Our house wasn’t destroyed but all our things were drenched and most of it were ruined,” Perlas said in Filipino.

Perlas was relocated to Montalban, Rizal after their home in San Andres Bukid, Manila was demolished due to a road-widening program of the government at the boundary of Makati and Manila in 2003. Perlas noticed that the slightest rainfall would make their relocation site flooded but an abnormal typhoon like Ondoy left them with no money, no furnitures and belongings and yet no help from the government.

“The first help that we received were from Anakpawis Party-list and Kadamay. Other NGOs also came to help us. But help coming from the government sector came only after a couple of days,” Perlas said, “We had a hard time cleaning our area. Some NGOs came to help but the government’s arrived very late.”

But after her gradual recovery from the damages that Ondoy had caused, Perlas and her neighbors still have to face the dire living conditions that they have to go through even before the storm Ondoy hit the country, foremost of which is the lack of job opportunities in the area.

“It is hard to make a living in Montalban, unlike when we were still in Manila where I earn once in a while (from my sidelines),” Perlas said.

So this coming elections, Perlas will choose wisely who she will vote for. She told Bulatlat in an interview at the Labor Day rally at Liwasang Bonifacio that the candidate she will vote for president should commit to working for the interest of the poor, “prioritizing housing facilities, job opportunities, and livelihood programs.” 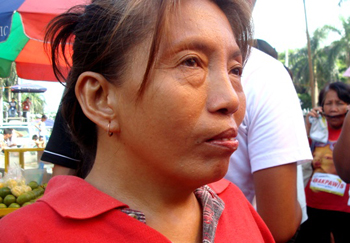 Unfortunately, Perlas still do not have a presidential candidate in mind, even as the elections are less than a week away. The presidential race is now in full swing, each claiming that their platform would eradicate poverty. In an interview with Bulatlat, urban poor advocates laid out their challenge to the next administration.

“Our challenge for the next president is to be honest and to serve the people especially the poor,” Kadamay national chairperson Carmen ‘Nanay Mameng’ Deunida said, “We want jobs, an increase in the minimum wage, and give us our own shelter. We want the demolitions to stop and free education for the children.”

The present administration has already tried to conceal the poor quality of jobs underlying the supposed employment figure of 36.1 million in 2009. But independent think-tank Ibon Foundation reveals that 4.2 million of these are unpaid family workers, 12.2 million are own account workers while 11.7 million wage and salary workers are without written contracts.