CEBU CITY — Lisa (not her real name), 27, lined up in one of the polling places at the Abellana National High School in Cebu City. She went to the polling place at around 10 in the morning to cast her vote. Her precinct, she was told, had 800 voters, and as of 7:45 of May 10, only 200 voters have been accommodated.

Twenty percent of voters from Region 7 were disenfranchised in the first automated elections, according to an ecumenical monitoring group in Cebu.

Fr. Jess Dumaual, MSC, co-chair of Pagbabago! Cebu said twenty percent of voters in Region 7 were disenfranchised. He added that the disenfranchisement was caused by the Commission on Elections’ inability to foresee otherwise simple and preventable problems.

“What is sad is that there were many voters that turned out in the polling places, but many decided that voting was not worth their while after having waited for five to six hours,” he said in Cebuano.

Fr. Dumaual said that although the agency may have been able to fulfill its primary role of conducting the elections, but to have caused the disenfranchisement of many, who otherwise would have wanted to vote, is a first in the country’s history.

“This is different from those who willfully were disenfranchised. These people actually wanted to vote. They went to the polling places only to wait on long queues for hours,” he said.

The Commission on Elections Region 7, however, claims that 80 percent of the registered voters in the region were able to cast their votes before the polls closed at 7 p.m. yesterday, with some precincts still continuing to entertain more voters.

In San Fernando, Cebu, voting in some precincts closed as late as 5 a.m. the next day, as the Board of Election Inspectors of the said precinct allowed voting only by batch, while making other wait until everyone in the batch were finished voting. 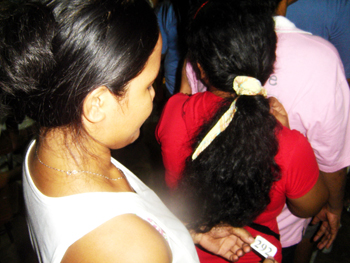 A voter in Cebu City patiently waits for her turn to cast her ballot. (Photo by Ritche T. Salgado / bulatlat.com)

“That is a big mistake of Comelec. They are very excited to transmit the results, wanting to show that this year’s election is fast. It seems that that is their priority for this election, to show how fast they can be,” he said. “But this is inconsistent with the Comelec’s mandate. It is impossible that those who are still to vote would not be influenced.”

In a joint press briefing with PNP Region 7, AFP Central Command and the Cebu Citizens’ Involvement and Maturation in People Empowerment and Liberation (C-Cimpel), Comelec Region 7 Director Dennis Ausan said, “Our general assessment is that the elections (in the region) was peaceful and successful, despite all the difficulties, from long queues, the usual difficulties in looking for names, and minor (machine) glitches.”

He said that so far, the first stage of the elections was successful and is “far far away from what has been projected; that there will be a failure of elections.”

Director Ausan said that all precincts in Region 7 functioned, and as of press time, Comelec was still collating the total number of votes cast, although, he revealed that initial feedback placed the figure at 80 percent. This, he said, was based on the figures given to him by the different provincial elections supervisors. 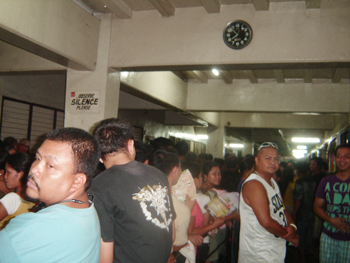 For his part, Region 7 police director Police Chief Superintendent Lani-O R. Nerez said that there were some voters who were unruly, but these were minor and isolated incidents. This he said, prompted the BEI’s to ask for their assistance.

PC/Supt Nerez said that even the stand off in Bogo City is an isolated event, but to prepare for any eventuality that might result, reserve units from Centcom were deployed.

Judge Gabriel Ingles of C-Cimpel echoed the assessment of Director Ausan, saying that in most precincts that they monitored, roughly 78 to 80 percent of the voters were able to cast their vote before 8 p.m., with one precinct in Barangay Day-As had experienced delays.

“I would want to congratulate the voters who went to their respective polling precincts and stayed there. They were able to overcome the temptation of going home because of long queues and went on to vote,” he said, adding that casting one’s vote is a Constitutional right that everyone must practice and take advantage of. — With reports from Joseph Ebarita Bacud/ Bulatlat.com