Thirty seven hectares of land in North Triangle, Quezon City, is set to be developed into the QC-Central Business District (QC-CBD), which would be patterned after the Makati Business District. Ayala Land Corporation is the partner of the Quezon City government in this project.

However, the project would displace 16,000 families. Residents from Barangay San Roque, the first barangay to be demolished, held a protest action opposing the dismantling of their houses last May 14, 2010. The demolition has been moved to June 18.

Asioneta Esquilon, 60, is a water vendor at North Avenue, MRT station. She rents a house in San Roque and has been a resident for five years. Since her source of income is in the area, Esquilon hopes that her family will not to be transferred to Rodriguez, Rizal, the proposed relocation area.

Her sisters who have lived with her before have already voluntarily moved to Rodriguez, fearing that the demolition will be violent. But Esquilon said those who opted to voluntarily relocate were only given P1,000 ($22) by the government to supposedly help them settle down.

“The P1,000 is actually given to them so they can buy candles. They do not have electricity and water supply there. They are upset,”Esquilon said.

Esquilon said aside from enduring the difficult living conditions in the relocation area in Rodriguez, her sisters also could not afford the transport fare from Rodriguez to Quezon City where she also earns a living as a vendor at North Avenue.

Some of Esquilon’s friends also voluntarily relocated to avail of the money offered by the government. But after moving to the relocation area, they discovered that the government failed to comply with the promises they gave. Foremost among their concerns is the lack of job opportunities for residents.

“I do not want to go there (in Rodriguez) because my livelihood is here. It would be difficult and unaffordable for me to travel from Rodriguez to Quezon City,” Esquilon said in Filipino. “I have a son who is a tricycle driver here in San Roque. If we move, he would lose his job. Besides, I am too old to adjust to a new place.”

‘This Program is for the Few and the Rich’

Mayor Belmonte said in an interview that he will keep on developing the other parts of North Triangle, The TriNoma Mall is one of the projects being referred to as part of the continuing “development” of the Quezon City.

“But this program is not for us, it is for the interest of the few and the rich,” San Roque Community Council – North Triangle Alliance (SRCC-NTA) chairperson Alberto Evangelista said. 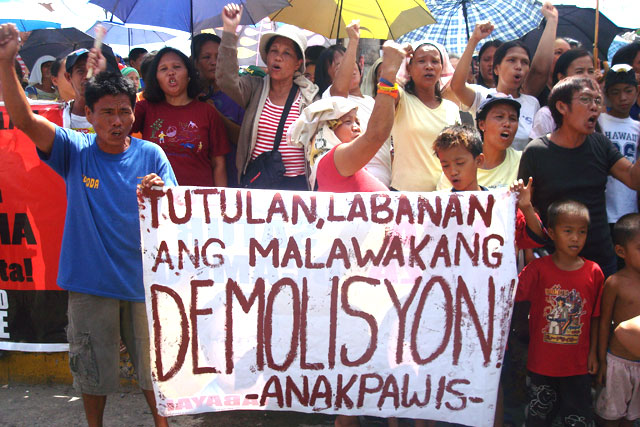 Jon Vincent Marin of Kadamay, an urban-poor advocacy group, said the protest action is not about opposing urban development. The people are protesting because of the lack of alternatives being offered to them. The government failed in providing concrete plans for them. Martin said Montalban, Rizal, which is also the relocation site of most informal settlers, lacks facilities. Those who have relocated to the area complain about the deficient supply of electricity and water.

“They call this development because infrastructures will be built here, but how could the people benefit from this? Yes, this will earn revenues for our country and rich investors would benefit from this but 25,000 families will be demolished,” he said.

Demands on the new administration

On May 14, the court gave the informal-settlers until June 18, 2010 to conduct dialogues with National Housing Authority (NHA) and Urban Triangle Development Commission (TriDev).

“There should have been a consultation wherein both parties will agree on the amended decision,” said by Edwin Nacpil, Spokesperson of San Roque Community Council. However, he added, there were no consultations or dialogues conducted between the government and the residents thus, their strong opposition to the hasty decision of NHA to demolish their houses.

According to a press statement released by the people of North Triangle, they are challenging the newly-elected president Benigno Aquino Jr. to repeal Executive Orders 620 and 620-A signed by President Arroyo that have the paved way for the construction of the Quezon City Commercial Business District.

Marin’s call to the new administration is to put into action Aquino’s promises to support the rights of the poor, especially their right to shelter and a livelihood. “Now that we will be having the Aquino administration, then it is a must for him to review this QC-CBD and other urban development projects such as the C-5 extension, PNR modernization, Pasig River rehabilitation and many more,” he said.

“We need change. We have done our role by voting, now let them do the promises they have pledged,” said Evangelista.

According to Nacpil, they will conduct education seminars among urban slum settlers about their rights to shelter, and a decent livelihood. Since the poverty rate is increasing, it is vital that development should focus on the people. “Cities should be for the people. The central concern in the planning of cities should be the people and not infrastructures.

“So, if the North Triangle is developed, we should benefit from it and we should not be left out,” Nacpil concluded. (Bulatlat.com)