MANILA — The Khandera Bridge in Jeddah, Saudi Arabia, has provided shelter to many stranded overseas Filipino workers. But since Saudi police barricaded it from migrant workers, OFWs have found a new home in the Philippine Consulate General in Saudi Arabia — but only outside its building.

John Leonard Monterona of Migrante Middle East described consular officials as “inhumane” and “heartless” for having the temerity to sit in their air-conditioned offices while stranded OFWs endure the hot temperature, reaching up to 40 degrees Celsius, outside. He said these Filipinos are living like “squatters” beside the consulate building.

Members of the local chapter of Migrante in Jeddah intervened on behalf of the OFWs through a dialogue with consular officials on May 14, 2010. They were able to talk to Vice Consul Leo Ausan, who informed them that consular officials were still waiting for the approval of their budget request from the national government.

“We find it ridiculous since there must be a government budget allocated for that on a yearly basis,” Monterona said. In the interview, he cited the P13.6 billion ($293.4 million) funds from the Overseas Workers Welfare Administration, gathered through the collection of the $25 compulsory membership fee from OFWs. 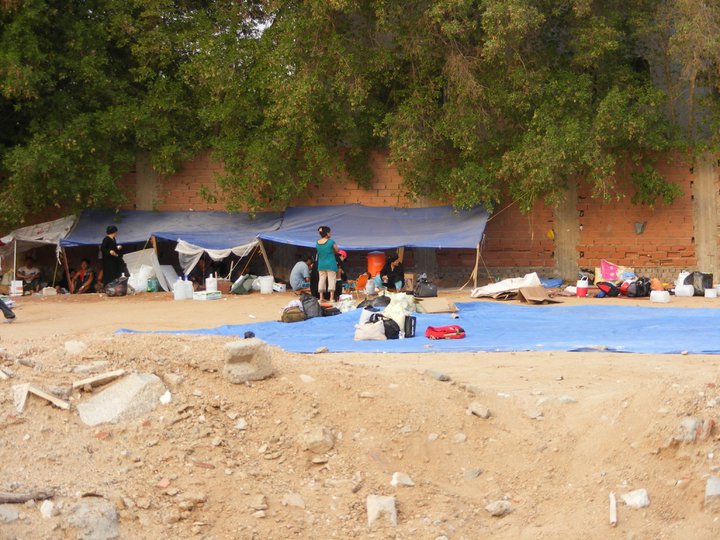 As of yesterday, Migrante reported that the 20 adults and four children residing outside the consulate building have been sent to the Hajj terminal, where they can temporarily stay.

For a some time now, consular officials have rented a building that serves as shelter to OFWs in distress because they are not allowed to keep them in their offices while waiting for repatriation papers. But there are still many migrant workers flocking to the Khandera Bridge while waiting for their repatriation papers. They also hope that the process of sending them home would be easier once the Saudi police would decide to put them in jail and have them repatriated.

President Benigno S. Aquino III, in his inaugural address, directed all government offices concerned with OFWs such as the Department of Foreign Affairs and OWWA to intensify their responses to the needs of Filipino migrant workers. “But it seems that his message has not been heard clearly by various Philippine officials abroad,” Monterona said.

The problem of runaways and stranded OFWs is recurring, especially in Saudi Arabia. Most of these OFWs are victims of abuses, maltreatment, contract substitution, exploitative working conditions, among others.

The rights and welfare program of Migrante International reported that, from January 2009 to April 2010 alone, 225 Filipinos were stranded, jailerd or in deportation centers and shelters.

This included 32 hospital caregivers from various job sites of the Annasban Group of Companies, 52 women who escaped their employers and are now residing in the deportation center in Doha, Qatar, another 50 in various deportation and jails in Jeddah

There are also six remains of dead OFWS waiting to be repatriated. Six more OFWs are enduring harsh conditions in jail. Migrante said most of these jailed OFWs were only framed for the crimes that they have been accused of, such as Mauro Duatin who was accused of participating in the robbery in their office. He was jailed in September 2009.

Worse, there are others like Nerissa Neri who was raped by a Bangladeshi national on Aug. 9, 2009. She was sent to prison by her employer, believing that she was having an illicit affair with the Bangladeshi national. She was pregnant and had a miscarriage on December 2009 after which she received 50 lashes from local authorities in Saudi.

“They are enduring the most deplorable and cruel conditions and are lacking much needed legal and financial support from the DFA, Philippine embassies and consulates,” Migrante chairman Garry Martinez said in a statement.

Monterona said there might be another 500 more stranded OFWs who would be needing the help of the government. Monterona challenged Aquino to keep his promise and to “appoint a new breed of public servants” who could deliver genuine services to OFWs and their families.

“We expect Aquino to make public his plans and course of action on these cases as soon as possible,” Martinez said. (Bulatlat.com)