After Fleeing from Palparan, Peasant Leader Ends Up in Manila Prison

After the attempt on his brother-in-law’s life, peasant leader Dario Tomada fled to Luzon and took on different jobs to support his family back in Leyte. Five years later, he was arrested by soldiers for 15 counts of murder that allegedly took place in 1984 — when he was still peacefully tilling a small piece of land and was not involved in any organization.

MANILA — On Sept. 10, 2006, Dario Tomada, then chairman of the Samahan han Gudti nga Parag-uma ha Sinirangan Bisayas (Sagupa-SB or Organization of Small Farmers of Eastern Visayas), left Kanangga, Leyte, upon the advice of his colleagues. Like many of the leaders of people’s organizations in the region, Tomada’s life had been in danger.

In May 2005, Tomada’s brother-in-law Salvador Ycoy was shot at by unidentified men believed to be military agents. The perpetrators mistook Ycoy, who is mute, for Tomada. Luckily, Ycoy survived.

During that period, retired Maj. Gen. Jovito Palparan Jr. was the commanding general of the 8th Infantry (Storm Troopers) Division in Eastern Visayas. Within six months of Palparan’s assignment in the region, human-rights group Karapatan had recorded 570 human-rights violations victimizing 7,561 individuals, 1,773 families and 110 communities. These include 126 cases of extrajudicial killings and 27 cases of enforced disappearances.

Tomada went to Manila and took on several jobs. Many times he worked as a construction worker. One time, he was employed in a factory. Whatever he earned, he would send to his wife Amelita and their four children who were left behind in their home in barangay Tagaytay, Kanangga.

On July 22, at around 11 p.m., while working as a parking attendant at a local restaurant, Tomada was arrested in Binan, Laguna, by five men in civilian clothes believed to be agents of the Intelligence Service of the Armed Forces of the Philippines (ISAFP). He is facing 15 counts of murder that allegedly took place in Inopacan, Leyte in 1984.

Based on a fact sheet prepared by Tanggol Magsasaka, Tomada was handcuffed and blindfolded and brought to Camp Aguinaldo at about 12 midnight of July 22. An interrogation lasted for about 30 minutes. He remained blindfolded and repeatedly slapped. He was fed tapsilog (fried rice, fried egg and beef jerky), which gave him a stomach ache.

The following morning, around 6 a.m., he was again interrogated by four agents who offered him money in exchange for pinpointing certain individuals who are currently based in Luzon. The agents were also trying to connect him with the Kilusang Magbubukid ng Pilipinas (KMP). He affirmed that he left Eastern Visayas because he was being hunted down. 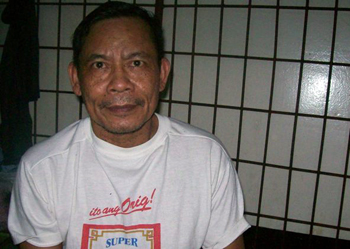 While he was being questioned, his nipples were being squeezed and his ears twisted. He remained blindfolded until 3 p.m. of that day.

Tomada was alone in a small detention cell, measuring around 5 x 5 feet inside an office at Camp Karingal. He slept on a plastic mat. His personal belongings were contained in one plastic bag.

He said there was no water in the building and that he, together with some policemen, had to fetch water outside the building where he is being detained. By the time Amelita came at around 2:30 p.m., he had not yet taken his lunch. The policemen just told him that they had forgotten about him.

Amelita was wiping away her tears as she talked to her husband. She left their four children, the youngest being 11 years old, at home. She borrowed money from a relative to be able to visit Tomada.

Asked if he knew about the 1984 incident, Tomada told Bulatlat in an interview: “I was then only working on my farm. I was not yet involved with our peasant organization.”

On March 6, 2007, the Hilongos Regional Trial Court issued a warrant of arrest against Prof. Jose Maria Sison, Bayan Muna Rep. Satur Ocampo, Randall Echanis and others, including Tomada, for having allegedly supervised the execution of 15 members of the Communist Party of the Philippines and the New People’s Army (CPP-NPA) in Inopacan, Leyte in 1984. A reward of P150,000 was offered by the military for his arrest.

Ocampo was arrested and detained in March 2007 on the same charge but was freed after filing a petition at the Supreme Court.

“Ka Dario is innocent of the crime he is being accused of. He is actually a victim, a refugee who fought for genuine land reform,” said Antonio Flores, KMP spokesman and Tanggol Magsasaka co-convenor.

Enriquez said the Supreme Court ruled in 2007 that the Regional Trial Court proceedings should be suspended based on the petition of those being charged explaining their innocence on the said case.

Enriquez urged the Aquino government to stop the practice of persecution of political dissenters. She called on Aquino to free all the 402 political prisoners in the country. (Bulatlat.com)